We review the rejuvenated Aston Martin Rapide, with new looks and an extra 50bhp from its V12 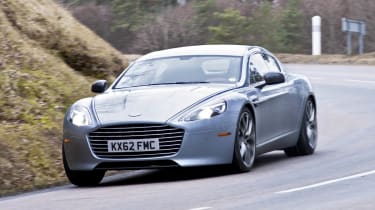 What is it? A facelifted, faster version of the Aston Martin Rapide. The ‘S’ version, which replaces the previous car, gets a reworked V12 engine plus various styling and chassis tweaks. Despite the extra performance and kit, Aston has kept the Rapide S’s price identical to that of its predecessor: £149,950.  Technical highlights? Say hello to the new ‘AM11’ version of Aston’s venerable 5.9-litre V12, the same engine that’s been drafted into the new DB9 and Vanquish. The peak 550bhp is a whopping 80bhp more than the original Rapide thanks to a combination of revised engine internals, including lightweight hollow camshafts, a new induction system and – most importantly – a big jump in the V12’s rev ceiling.

Peak power now comes at 6750rpm, against 6000rpm in the old car. There’s also a modest increase in torque – up 15lb ft to 457lb ft - but Aston also claims to have improved drivability by retuning the engine to deliver a minimum of 30lb ft extra from idle to 4000rpm. The extra power trims 0.4sec from the Rapide’s 0-62mph time, down to an impressive 4.9sec. The other dynamic highlight is the arrival of new electronically controlled dampers, which now offer an ultra-firm ‘Track’ setting alongside ‘Standard’ and ‘Sport.’ This is activated by holding down the damper control button for three seconds.

What's it like to drive? The Rapide remains a wonderful thing – fast, agile, responsive and supremely comfortable. The engine remains the car’s defining feature, creamy smooth when used gently and positively savage when unleashed. Despite the boosted power output the Rapide S still lacks the initial punch of turbocharged rivals, especially as the six-speed automatic gearbox it works with feels positively leisurely by modern standards.  But once the engine does come on song – the blue touchpaper moment is probably around 4000rpm – it’s an awesome thing, with linear and seemingly unrelenting thrust plus a soundtrack that could reanimate the recently deceased. Other cars might quicker to respond or faster overall, but you can’t buy another four-door car that sounds better than this one.  The chassis plays an able supporting role. The dampers’ ‘Track’ setting proved pretty much perfect for the smooth Swiss and French tarmac we drove the car over, lashing the body down without corrupting the ride too much. As before, the Rapide S changes direction remarkably well for something so big, staying flat and nosing its way towards apexes with an enthusiasm that belies its two-ton kerbweight. Traction is good too, and the engine’s relative lack of low-down torque makes it easier to drive quickly and cleanly than boosty rivals.  The only mild complaint is with the brakes, with the pedal growing soft when asked to deal with a series of big stops some way short of what you’d experience on track.  How does it compare? The Rapide has always existed in a segment of one, with its tight-fitting cabin denying it the chance to be properly compared to super-saloon rivals like the Porsche Panamera and Bentley Continental Flying Spur. If you can live with the limited rear-seat accommodation, which will get even small adults complaining after about an hour, then it remains a compellingly different take on the luxury four-door coupe. Anything else I need to know? Aston has replaced the terrible Volvo-based satnav of the original Rapide. And replaced it with an equally terrible Garmin-based system, which refuses to let you enter a destination without both a street name and a house number, and which seems to be incapable of zooming in or out.  We managed a slightly terrifying 13.5mpg during our time with the car. Gentle motorway cruising can push that to the high teens, but using the V12’s performance to the full will always carry a sizeable cost.

Video of the Aston Martin Rapide S in action...