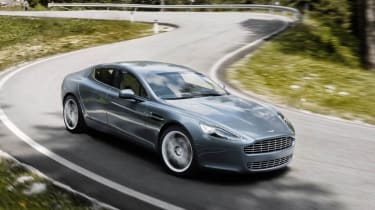 What is it?It’s the four-door Aston Martin. Based on the same architecture as the DB9, the Rapide employs the same 5.9-litre V12 and six-speed automatic gearbox and takes aim at the Porsche Panamera and Maserati Quattroporte. It costs £139,950. Technical highlights?OK it’s not strictly technical, but the rear seats are the highlight here. Is it spacious enough for four? Not by the standards of its rivals. The two sculpted rear seats, divided by a high console, are decidedly snug – good for holding you in place if the driver gets a bit carried away, not good for sprawling. Comfort is limited by the short seat cushions and the acute angle your legs have to adopt due to the lack of legroom. At least the ambience is good and the front seats narrow enough to provide a reasonable view out. What’s it like to drive?Here’s the good news - it’s great. We covered 1300 miles over three days and although the taut set-up does take the edge off motorway refinement, and it’s far too sporting to be considered a saloon, it really does drive very well indeed – better than a DB9, better than a DBS. In fact it’s our favourite current Aston bar the V12 Vantage.  Its front end is faithful and accurate and although there’s occasional mild kickback through the rim, the ideally weighted steering feels more natural than that of any other recent Aston. Its chassis is especially good in the transient moves, flicking left, right, left, which highlights the car’s precision and the no-nonsense way the suspension deals with the surface. The damping is a particular highlight.  The V12, alive from 3000rpm, provides a stirring soundtrack; heavy gravelly, glorious – a great companion for the fluent handling and ride combination. The styling? That’s more of a sticking point. It’s rather long in the flank thanks to the extra 250mm added to the wheelbase and imply doesn’t have the visual balance of Aston’s coupes.  How does it compare?To find out you’ll need to buy a copy of this month’s evo magazine (on sale now) where the Rapide goes head to head with the Porsche Panamera, Maserati Quattroporte and Bentley Flying Spur Speed, with typically excellent evo photography. evo 141 is here Anything else I need to know?Despite Aston’s claim that this isn’t a stretched DB9, and that only the front doors and bonnet are carried over, it still feels much like an Aston Coupe. The switchgear is largely carried over and you sit low enjoying a great driving position. If you want a genuine four-seater we’d point you in another direction, but as a driving tool the Rapide will take some beating.