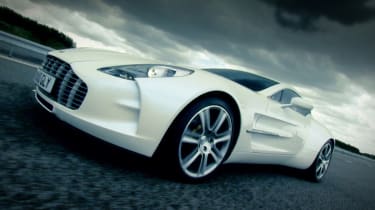 Aston Martin’s million pound supercar has been certified as the most powerful naturally aspirated road car. The Bugatti Veyron-rivaling One-77 will boast 750bhp and 553lb ft of torque, provided by its monstrous 7.3-litre V12 engine. While those figures fall short of the Veyron’s 1000bhp and 922lb ft, the Bugatti achieves those by strapping four turbochargers to the car’s sixteen-cylinder engine. The One-77 impressively does without forced induction, a move we very much approve of. The Aston Martin One-77 is now very close to production reality, after months of rigorous testing in hot and cold climates and on the Nurburgring Nordschleife. Deliveries of the 77 cars are expected to begin in early 2011. If that’s too long to wait, then watch the video below. Aston Martin’s CEO, Dr Ulrich Bez, and Director of Design, Marek Reichman, talk us through the car before it’s shown in action on track.

All the Aston Martin One-77 details and pictures here