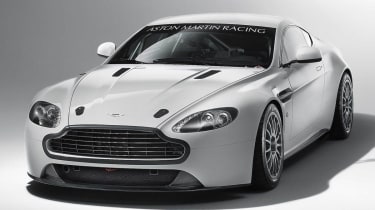 Aston Martin has revealed its new Vantage GT4 racing car. It is closely based on Aston’s road-going V8 Vantage coupe, though the new 2011 car benefits from design features of the stunning V12 Vantage. These both enhance the aerodynamics and increase downforce.

The 4.7-litre V8 engine has also had a remap, increasing both power and torque, though no firm figures have yet been revealed. They should better the 420bhp and 346lb ft of the standard car (and the excellent N420 special edition), though. Expect a 0-60mph time of around 4.5sec and a 180mph+ top speed.

For the first time on a Vantage GT4, drivers can choose a race-honed Bosch ABS and traction control system, which has been developed in both wet and dry conditions.

A new splitter sees front downforce boosted while work at the rear (including a new carbonfibre diffuser) helps create low pressure at the back of the car, further increasing downforce.

The last two years has seen Aston Martin sell more than 80 Vantage GT4s to racers globally, and it has picked up race honours in many big endurance events, notably the 24-hour races of Spa, Dubai and the Nurburgring. There’s no reason why the new 2011 iteration won’t continue such successes.

See our review of the race-inspired Aston V8 N420