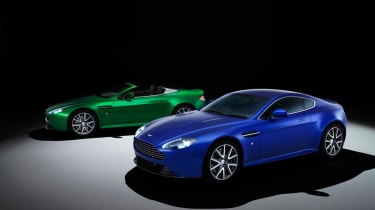 Aston Martin has revealed its new V8 Vantage S. It’s the sportiest and most powerful V8 Vantage yet, with styling inspiration from the supercar-slaying V12 Vantage and an extra 10bhp over the N420, currently the highlight of the V8 range. The Vantage S retains the standard car’s 4.7-litre engine, but boasts outputs of 430bhp and 361lb ft of torque. It comes equipped with an all-new gearbox, Sportshift II. It’s an automated manual with seven speeds, and is said to be 20 per cent quicker shifting than the transmission it effectively replaces. It’s also 24kg lighter, contributing to a 30kg drop for the V8 Vantage overall, the S weighing 1600kg. The Vantage S gets a sport button, too, which quickens the gearshifts further as well as cranking up the exhaust note of that sonorous eight-cylinder engine. Other enhancements for the Vantage S include quicker steering (2.6 turns lock-to-lock compared to 3.0), bigger brakes (the front discs are up 25mm to 380mm) and rear suspension tweaks to boost traction and stability. The DSC stability control system gets a new track mode, too. As you can see in our big picture gallery, both coupe and roadster variants of the Aston Martin V8 Vantage S will be available, with prices starting at £102,500. That compares to the standard, 420bhp Vantage’s £88,995 kick-off point. The Aston Martin V8 Vantage S will be revealed at the 2011 Geneva motor show, with deliveries starting in March.