The wraps are off the first Aston Martin Zagato since 2002, and evo will be racing it at the Nurburgring 24 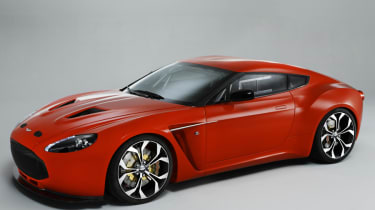 The evocative partnership between Aston Martin and Zagato has lasted half a century and during that period produced classics such as the DB4GT Zagato, V8 Vantage Zagato and the DB7 Zagato. Now to celebrate the half century of its most famous collaboration there’s a new Aston Zagato based the V12 Vantage. There will be both racers and a limited production run of road cars too.Work began just last year, director of Design, Marek Reichman takes up the story: "The V12 Zagato is an elegant yet brutal design which reflects the great balance between race performance and pure Aston Martin style. The original DB4GT Zagato was a true icon, powerful and graceful; the new design is a true representation of the spirit of DB4GT Zagato. The muscular organic forms define the thoroughbred nature of the car’s racing credentials."It features a new handcrafted aluminium body, Zagato’s ‘double-bubble’ roof (created from five separate pieces), oversize grille, chunky rear arches and comprehensive aerodynamic revisions. It will be unveiled at the Villa d’Este concours in Italy and a  week later entered into the Nurburgring 24 hour race. Part of the driving line-up will be our own Richard Meaden, and he will be at the Nordschleife next weekend (29th May) for a four-hour shakedown race prior to the twice around the clock event. You will be able to follow his progress right here.