Isle of Man TT bike racer Guy Martin doesn't own a home, works as a truck fitter by day and has just bought an Aston Martin V12 Vantage 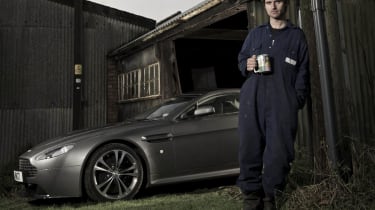 His hair looks as thick and healthy as an early summer hedgerow and almost as likely to have a wren nesting in it. His hands – not big, but powerful, with fingers like sausage rolls – would need caustic soda and a wirebrush to get them even approaching clean. His footwear has steel toe-caps. You can tell because the filthy, oil-soaked leather has worn away to give a peep of the metal beneath. His overalls have his name on the breast pocket.

It does not compute. Guy Martin is a 28-year-old truck fitter. Truck fitter, Aston Martin. Aston Martin, truck fitter. We first meet Guy at his workplace, in a truck yard at the bottom of a bombed-out runway of an approach road. He’s preparing to skim the cylinder head of an Iveco van, hand-winding the old, manual milling machine’s bed while the multi-tipped tool takes half a millimetre, in tiny chips, from the gasket face of the head. All the while he chats, about this, about that. It’s precision engineering made to look as easy as whisking eggs.

Job done, we jump in his Transit van. ‘I’m trying to get 100,000 miles out of the tyres and pads,’ says Guy. We’re going to see the V12. It lives a short drive away, in the kind of place car photographers love to position exotic cars to offer a clichéd juxtaposition. But Guy isn’t doing it for effect. The V12 actually lives in a barn, with no doors and no window glass to stop the wind whistling through. Guy himself lives next door, lodging at his girlfriend’s parents’ place.

Obviously there’s more to the story. Truck fitters don’t buy new Aston Martins. The twist is, Guy also races motorcycles. ‘But motorcycles are a hobby,’ he says. ‘Trucks are work.’

Guy competes, and excels, on what British bikers call ‘the roads’, the annual races held on temporarily closed public roads. The most famous example is the Isle of Man TT, and while Guy is yet to win the TT, he has scored eight podiums since his debut in 2004 (all TT racers compete in more than one class in the fortnight-long event).

There are other road races. The Northwest 200 on the coast of Northern Ireland regularly boasts a 200,000-strong crowd, arguably the largest attendance for a one-day sporting event in the UK. There is also the Ulster Grand Prix, like the TT a former GP that in days gone by the likes of Agostini and Hailwood were expected to race at along with more regular circuits like Assen and Monza. Now they’re the preserve of the specialist. Valentino Rossi is a fan, and attended the TT in 2009. He and Guy share a sponsor and both featured in the global advertising for Dainese, the Italian leather manufacturer. But Rossi and his ilk wouldn’t contemplate racing on the roads.

All these races, and the smaller, even more hairball events dotted all over Ireland, are contested on both 600cc and 195bhp 1000cc Japanese superbikes. This makes it more dangerous than wolverine juggling. These bikes, as powerful as World Superbikes, are raced down lanes no wider than suburban driveways, with jumps that fire machine and rider seven feet into the air over a distance of 30 feet or more. Riders use kerbs to stop 140mph slides. You see them, banked, knee on the road, flat-out in fifth at over 160mph with their front wheels off the ground. It beggars belief.

At the end of a day’s racing, the best riders pick up prize money. Although sometimeseven the very best riders don’t see the end of the day. And out of this danger comes a saying that’s spawned a mindset: ‘We’re not here for a long time, we’re here for a good time.’ Pensions are out. Savings are out. Mortgages are out. Astons are in.

The Vantage has a light covering of dust and a few white pigeon-pats where sheltering birds have shown their appreciation for the grandest of gran turismos. When Guy fires it up, it sounds like it’s gargling on super unleaded. He eases it into the open for a thorough handwash, steel toecapped boot tickling the accelerator as the wide rear Pirellis squish farmyard slush on the way to the hosepipe.

‘I had a BMW E46 CSL when I was 21,’ Guy tells us. ‘It was a great car. I thought the Porsche GT3 RS would be better, but it was too hardcore. I couldn’t even fit my helmet in the back, because of the rollcage and fire extinguisher. It might have been faster on a lap of Donington, but on the roads around here it wasn’t. And it screamed at you – the red wheels, the red stripes… So I got rid.’

There have been long sabbaticals from sports car ownership when Guy relies solely on vans for transport. Sometimes a car comes along that he decides he needs. Sometimes he’s wrong. Between the GT3 and the Aston was a brand new E92 BMW M3 V8. ‘I drove it home and thought, “What have I done?” The novelty wore off before I even got home. I parked it up and didn’t even look at it.’ It was sold with 3000 miles on the clock and the 85bhp Transit was Guy’s road transport for a year. ‘I’ve learnt to heel-and-toe in the Transit,’ he grins.

He nearly bought a house once. Just as well he didn’t, though, otherwise when his ideal car turned into a limited production run reality, he wouldn’t have been able to pounce.

The V12 was a car that Guy had read all the rumours about for months before seeing one in the flesh at the Goodwood Festival of Speed. He was there as a guest, parading the Honda Fireblade on which he’d won some of the year’s biggest road races.

‘My dad had no interest in the BMWs or the Porsche. All he’d say was “It’s no Aston, is it?” And he was right. I nearly bought the Prodrive V8 Vantage, but I’m glad I waited.

‘The day after Goodwood I went on the internet in my tea-break, to see if anyone had the V12 for sale. Dick Lovett were advertising something, but it wasn’t totally clear that it was a V12 Vantage. So I emailed them asking if it was. They rang back and said yes, but because they’d got hold of it so early they couldn’t advertise it as a V12.

‘I thought about it overnight, made sure I could afford it and rang the salesman at Dick Lovett’s the next day to say I’d have it.

‘Then I texted my girlfriend to say I’d done something stupid and I’d tell her when I got home. She thought I’d run a granny over or something. When I told her about the car, she said “Well, you always wanted one.” She doesn’t get excited about cars.’

So, what’s it for, really, this car that’s likely to depreciate quicker than caviar left out in the sun? This car that takes £460 to tax and over £2000 to insure (though that isn’t bad for a 28-year-old truck mechanic)? This car that no sane 28-year-old, without his own house, would splash out on (even if they had the means)?

‘There are times when I’m racing that I’ve thought, “This is it,”’ explains Guy, talking about some of his near misses. ‘But when you survive you’re left with a feeling like nothing else. It’s a buzz you can’t describe. And I’m chasing that buzz all the time. I love risking my life, but to get the buzz on a bike on public roads [when they’re not closed for racing] I’d need to be doing 180mph. You can’t, and I wouldn’t want to. The Aston isn’t everyday transport. It’s for a mad half-hour every now and then. And it’s also forever. I don’t think I’ll ever sell it. When I collected it from Dick Lovett’s there was a Ferrari F40 there. It had had two owners from new, and it looked like it had just come out of the showroom. I want this car to look like that after 20 years.’

Aston is planning to build another 999 V12 Vantages. It’s fair to say that none of them will be owned by anyone like Guy Martin.