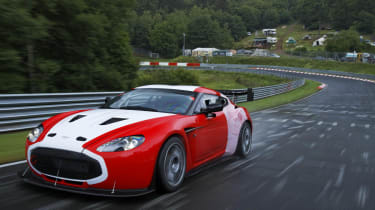 Aston Martin will return to the Nurburgring 24-hour this weekend to race its V12 Zagato mere weeks after the car was launched at the Concorso D’Eleganza at Villa D’Este on the banks of Lake Como in Italy.

This year will be the sixth consecutive time the company has participated in the event, but is the first time it has done so with a car so new.

With work on the car started just last year, so the Gaydon crew has had quite a task preparing the two V12 Zagatos - known as ‘Zig’ and ‘Zag’ - for the demands of racing at the Ring.

Evolved upon the tried and tested V12 Vantage base which won its class in the 2009 race, the Zagato features extensive aerodynamic devices which in tandem with 530hp from the 6.0-litre V12 should eclipse Aston’s previous best time at the race of 8min 56sec.