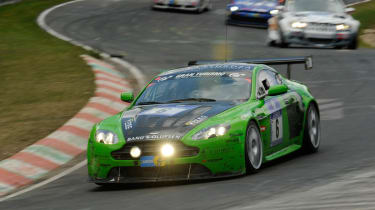 With Le Mans now done and dusted, the 2011 Nurburgring 24-hour race on June 25 to 26 is the next big event on our motor sport calendar.  It looks set to be a cracker too if the current VLN series - which has featured five different manufacturer winners from five starts - is anything to go by. BMW, Mercedes-Benz, Ferrari, Porsche and Audi are chronologically those with wins on the board so far and while they reflect differing engine/drive train configurations, all will be fighting for class as well as overall honours. The 24-hour circuit, which mates sections of the grand prix circuit with the mighty Nordschleife (northern loop) of the Nurburgring, will also see evo regulars John Barker, Chris Harris and Richard Meaden competing for three different manufacturers across three classes. While this separation would seemingly negate the possibility of spilled tea and harsh words in the office, there are no evo team-orders and all will be racing hard for bragging rights and perhaps a class win at the ring. John Barker will be driving an Audi R8 LMS GT3 in class SP 9 GT3, with Richard Meaden in Aston Martin’s incredible V12 Zagato in SP 8 and Chris Harris at the wheel of a Porsche 911 GT3 Cup car in SP 7. As always the international nature of the event sees the field chock-full of interesting cars and high profile drivers including Carlos Sainz in a Volkswagen Scirocco, Andy Priaulx piloting a BMW M3 GT and former F1 driver Mika Salo in the Ferrari 430-based N.Technology P4/5 Competizione, the build of which created vast interest online via social networking sites. More famous names include Johnny Herbert, fresh from his 20th anniversary reunion with the Mazda 787B he took to victory in the 1991 Le Mans 24 hours, and Mark Blundell who will combine with Herbert in the chunky, four-wheel drive Volkswagen Golf GT24, a real contender for a top ten placing if things get wet. The Nurburgring also offers amateur racers the opportunity to test their mettle with names such as Kazunori Yamauchi (creator of the Gran Turismo game series) racing a Nissan GT-R after a credible 4th in class last year at the wheel of a Lexus IS-F. The grid this year is limited to 250 entrants and features a staggered start to prevent congestion. In 2010’s race, 199 started and 123 finished, evo’s Roger Green one of those who failed to cross the line after a dramatic fire destroyed his Lotus Exige.