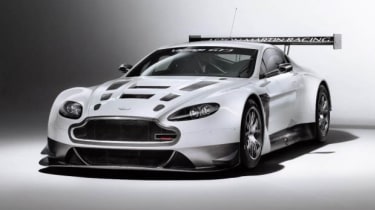 Aston Martin is the only car maker with a racing car for each of the Le Mans 24-hour’s categories. And this is its new GT3 car, a seriously aggressive V12 Vantage.

Under its multiply-vented bonnet lies a a dry-sump version of the road car’s 5.9-litre V12 engine, cranked up to 600bhp and 516lb ft – healthy improvements over the 510bhp and 420lb ft showroom spec. It powers the rear wheels via an Xtrac six-speed semi-automatic gearbox and carbonfibre propshaft, and is sat behind the front axle to improve weight distribution.

Stopping power comes courtesy of six-pot brake calipers at the front and four-pots at the rear, with ventilated discs all round and manually adjustable brake bias.

Exterior modifications revolve around full aerodynamic treatment – there’s a gigantic rear wing, a front splitter and aggressive rear diffuser and ground-hugging side-skirts. It looks fantastic, and has us hankering after a V12 Vantage GT3 road car. Its 430kg weight-loss (to 1250kg) is especially promising.

Testing of the V12 Vantage GT3 racer has started with a 620-mile, two-day session at Brands Hatch, most of the mileage covered by factory driver Darren Turner, who describes the nimble Vantage as a huge step on from the bigger Aston Martin DBRS9.

Testing of the Aston V12 GT3 will continue into 2012. The car will be eligible to run in all FIA GT3 and national GT3 championships, the Blancpain Endurance Series, VLN and the Nurburgring 24 hours.