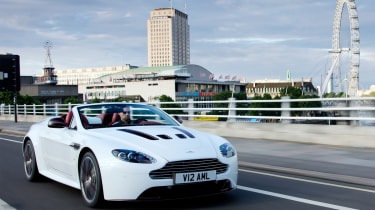 The Roadster weighs in at 1760kg, just 80kg more than the Coupe, and is fitted with a conventional fabric roof. There's carbon fibre trim incorporated into the front splitter and bonnet vents. The front bumper has been revised, along with the boot lid, giving slightly more stability at high-speed, which despite losing the roof, maintains the 190mph top speed.

Aston has re-tuned the damper settings, and redesigned rear spring layout at the rear of the car - a set-up which the company says suits the open-top nature of the car. Like the V12 Vantage coupe, the new Roadster features a Sport button, which changes the throttle map, and opens a valve in the exhaust.

Available to order now, the new Aston Martin V12 Vantage Roadster is priced at £150,000 in the UK.