When Italian supercars were getting wider and lower, this was a very British response 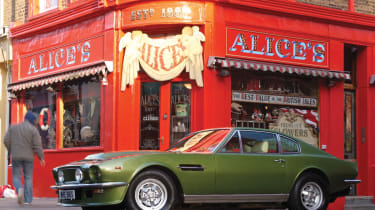 By the mid-’70s, Italy must have reckoned it had the supercar blueprint down: mid-mounted V12 with eye-popping power claims, bodywork sub-contracted to brilliant young designers given free rein to work out their sexual fantasies, a fusion of beauty, technical braggadocio and aural drama the like of which the world had never seen. Then, in 1977, Britain rolled out its response, and it was wonderfully straightforward.

Aston Martin blanked off the grille and bonnet scoop of its V8 coupe. The effect was remarkable. The old Newport Pagnell-built bruiser, which had been around sicne the turn of the decade, suddenly took on the aura of an assassin with urgent scores to settle. Of course, it’s what that grille signified that made it such a feared vision in the low rear-view mirrors of the Latin exotica. Britain had its first supercar.

With skimmed heads, bigger valves, reprofiled cams and 481DA carburettors, the 5.3-litre V8 now developed 390bhp, good enough for 0-60mph in 5.3sec (which was a tenth of a second quicker than a Ferrari Daytona), 170mph flat out and a side order of Lamborghini frittata for breakfast.

The suspension was stiffened and lowered, too, with wider rubber to put the extra power to good use. Of course, the grille blanking plate’s true purpose was to cut drag and hence increase the top speed to Countach-worrying levels, air flow instead being fed under the bumper, so full cooling was retained.

The Vantage flew the flag for Britain for more than a decade before it was finally retired in 1989. In 1986 the V8 was made even mightier, with bigger carburettors and racing-type cylinder heads helping boost the output to a prodigious 427bhp – essentially the same engine that would power the Vantage Zagato.