As Aston entered a new millennium, it needed an all-new supercar. cue Vanquish! 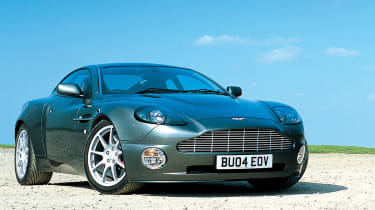 All right, any of the current Aston line-up (Rapide included) would kick the Vanquish into touch for chassis dynamics. Yet there’s still something magnificent and deeply desirable about this car, especially in its later, more potent, S guise. For style and sonics, Aston has produced nothing better since its 2007 demise.

The Ian Callum-penned Vanquish saw Aston Martin leaving behind the years of magnificent denial (the Virage Vantage had more dinosaur DNA than anything in Jurassic Park) to get with the new-tech programme. It was truly transitional, the last car to be hand-built at Newport Pagnell but with the extruded, bonded aluminium and composite ‘VH’ chassis architecture found beneath the skin of all subsequent Astons.

It had a shaky start. Slated to make its debut at the 2000 Birmingham Motor Show, it was pulled at the 11th hour by new Aston boss Dr Ulrich Bez, who took an understandable dislike to the idea of Aston’s £164,000 flagship wearing facia air vents lifted from a Ford Ka. Callum was given the task of rendering the interior ambience more ‘bespoke’, and by the time it was production-ready, there wasn’t such a jarring disconnect between the brutal beauty of the exterior and the bold, faux aluminium-adorned cabin.

Under the bonnet, a massaged version of the 48-valve 5.9-litre V12 from the DB7 Vantage had a 7 per cent increase in power and 2.5 per cent more torque.

But if 460bhp seemed more than adequate at launch, the Aston’s rivals were soon unpacking bigger numbers which, in turn, forced a reality check on the Vanquish. The more muscular and tautly-suspended ‘S’ took care of that, with a 60bhp hike in output. The beefier brakes that came with the optional Sports Dynamic Pack were a must-have, too. Finally, Aston could roll out a worthy rival for the Ferrari 550 Maranello.