initially seen as a DB9 in a bodykit, the DBS has emerged as a star in its own right 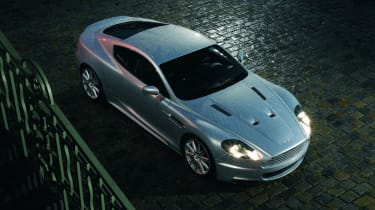 A DB9 with a bodykit, more power, stiffer suspension and ceramic brakes? Or a fitting flagship for Aston Martin after the Vanquish ceased production in 2007?

The DB9 had never lacked for power but, in the DBS, its 5.9-litre V12 – hand-assembled at Aston Martin’s dedicated engine facility in Cologne – featured a number of grunt-enhancing modifications, including a ‘by-pass’ air intake port that opened above 5500rpm to allow more air into the engine, and re-profiled air inlet ports that further improved airflow into the combustion chambers. Combined with a compression ratio of 10.9:1, the results claimed by Aston were 510bhp, a 191mph top speed and 0-62mph in 4.3sec – all top-drawer supercar stuff commensurate with a £160K price tag.

Then there was the adaptive damping developed in conjunction with Bilstein; beefier springs, suspension bushes and anti-roll bars; standard carbon-ceramic brakes; bespoke Pirelli P Zero Corsas. The DBS was clearly a whole different proposition to the DB9, and this was reflected in its handling – taut, responsive, and with a lairy side to its character that demanded respect and rewarded commitment.

And, in the best GT tradition, the combination of sublimely effortless V12 shove, a gigantic top-gear stride and a supremely comfortable cabin was capable of simply blowing away the miles.