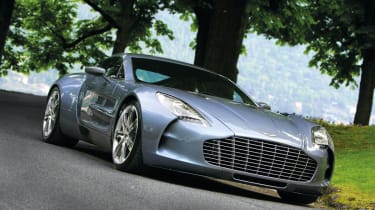 When the £1.2million One-77 revealed itself to the world at the 2009 Geneva show, it did so as a naked rolling chassis, more engineering sculpture than car. After seeing it, one customer asked if he could buy two, a proper car to drive and an unskinned version to park in his living room…

It is certainly one of the most beautifully detailed and constructed cars ever to see the light of day, from its carbonfibre monocoque to its hand-beaten aluminium body panels.

The engine started out as the 5.9-litre V12 from the DB9, but the only common part is the timing chain. Dry-sumped, bored out to a massive 7.3 litres, and put on an obsessive weight-saving regime, the Cosworth-developed V12 ended up weighing just 260kg and producing a quoted 750bhp, the highest figure, says Aston, for any naturally aspirated road car engine. It has a smaller flywheel to aid rev characteristics and intake variable valve timing. It’s also mounted entirely behind the front axle line, making the One-77 genuinely front/mid-engined. No independent figures have been taken, but Aston claims 0-60mph in under 3.7sec and a top speed ‘in excess of 220mph’.

You have to see the One-77 to believe just how ground-hugging it is. The move to a dry sump means the V12 is mounted 100mm lower in the chassis, dropping the centre of gravity massively and allowing the driver to sit that much lower too.

Production has been limited to just 77 cars, each taking around two months to build. The front wings alone are entirely hand-crafted from a single sheet of aluminium, each taking one man three weeks. Creating the 180kg carbon tub is another three-week job. So far, Aston has refused to sanction any test drives of the One-77, so final judgement will have to wait, but a genuine Aston hypercar? Surely that much is beyond doubt.