The 2013 Vanquish is critical for Aston. Can it repeat the magic of the original? 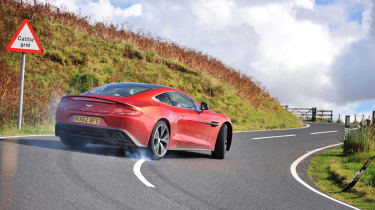 Remember the first time you saw the original Vanquish? Probably when it was glinting on a show stand at Geneva in 2001, dropping jaws and opening wallets. It just looked so glamorous, so effortlessly cool, a world away from the Virage line that went before and a brave new chapter for a company finally on its way to stability.

Well, that was 11 years ago, and Aston hasn’t made a radical styling move since, despite breaking out into new sectors  and taking on everything from 911s to Ferrari 599s to Bentley Flying Spurs. There’s a real sense that it’s time for the company to make another giant leap forward to secure its future and to capture the imagination of the buying public again. Aston knows it too, and dusting off the Vanquish name for its new range-topper is a bold statement. Can that fabulous badge rejuvenate the company once more?

The key details are promising – full carbonfibre bodywork, a 25 per cent stiffer chassis than the DBS with 75 per cent new parts, a reworked V12 mounted 13mm lower, a storming 565bhp and 457lb ft, a price of £189,995, a car that ‘points to an exciting and confident future’. On the other hand, it’s hard to escape the feeling that the Vanquish looks like the DBS with a boot spoiler and some slightly better-defined rear haunches. It’s another handsome Aston, but radical it ain’t.

On the road you can sense the lighter, stiffer chassis. The steering is smoother, the whole car more in tune with the surface, less edgy than the DBS, hooked-up and agile, the Adaptive Damping System (ADS) doing its stuff. On the motorway, save for quite a lot of road noise, the Vanquish does the bewitching big-lunged GT thing perfectly. Moving onto B-roads, it seems to make a pretty good fist of being a sports car, too…

It’s quick all right. The sustained, intensifying run to the limiter is a clear step on from the DBS. This isn’t a great hammer of an engine that overwhelms the rear tyres with torque. It likes revs and now it really has an appetite above 5500rpm, the point where the DBS starts to feel a bit strangled. It can’t match the sheer lunacy of Ferrari’s new F12, nor is it as thrilling as the scalpel-sharp 458, but 565bhp in 1739kg is just about enough to pass for supercar status in these mind-bending times. Certainly it’s rare that you feel short-changed by the 5.9-litre V12.

However, you always feel mildly disappointed with the Touchtronic 2 transmission – a six-speed ZF torque-converter automatic with paddle-shift. Around town it’s refined and slips into the background, but it lacks the creamy seamlessness of the new-generation ZF eight-speed automatic. Aston says there’ll be no manual option. Other details irk a little too: the seats lack support, while the satnav graphics look cheap.

So the new Vanquish struggles to compete with the F12 Berlinetta, but maybe it doesn’t have to. It is a very different character to the F12 – more laid-back, less flashy and without the F1 baggage. Although it might be a little old-fashioned in comparison to the new Ferrari, it’s still highly capable and genuinely exciting.