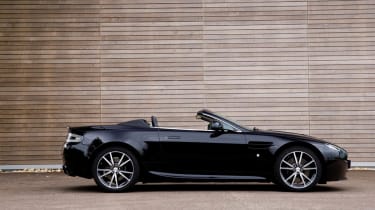 It’s not often you’ll find us recommending a convertible over its coupe equivalent, but if there’s one that comes close to bucking the trend it’s Aston’s N420 Roadster.

Built in both coupe (see evo 147) and Roadster versions, each costing £8000 more than the standard models upon which they are based, the N420 is a special-edition V8 Vantage designed to celebrate the company’s ongoing success in the Nürburgring ‘N24’ endurance race (420 refers to the bhp). Fitted with a tasty array of carbonfibre aero and styling tweaks, plus distinctive ten-spoke ‘diamond-turned’ alloys, and available in a choice of colours (including schemes that mimic the N24 racers), the N420 is as distinctive as it is desirable.

The V8 Vantage may be getting a little bit long in the tooth, but Aston seems to have found a sweet spot when it comes to set-up. Consequently in N420 spec the Roadster (like the coupe) feels sharper, sweeter and more memorable than ever before. While undeniably hard-edged, the chassis has a rare ability to feel as settled and at home on tricky B-roads as it does on quick A-roads and motorways.

The 4.7-litre, 420bhp V8 pulls harder sooner yet revs more keenly than previous iterations. True, the Aston isn’t that fast any more, offering similar performance to a BMW M3 for twice the money, but it’s quick enough, and thanks to its warm character and truly rousing delivery it’s also tremendously likeable.

Driving the N420 Roadster the same weekend as Porsche’s much-anticipated 911 Speedster, I have to say that, despite loving the Porsche’s looks, admiring its quality and acknowledging its cast-iron credentials as a rare collectors’ car, it’s the Aston that’s the more engaging and exciting experience. The N420 Roadster might not be viewed as a direct rival to something as specialised as the Speedster, but of the pair not only is the Aston the more handsome, but thanks to the option of a traditional stick-shift transmission, it’s also the more entertaining sports car to drive.

Perhaps the most praiseworthy aspect of the N420 Roadster is that its neat little canvas turret enables the car to deliver all the sensory pleasures of convertible motoring with none of the downsides. The structure feels tight as a drum, the dynamics are sharp as a tack and the styling looks as clean and cohesive as the coupe’s. I’m not normally a convertible advocate, but this is a peach.