The Aston has been back for a couple of weeks now, following a week-long visit to the factory where its bout of starting maladies was investigated. The engine would start, but would chug away on a handful of cylinders before conking out completely. Naturally the problem was intermittent, hence the lengthy stay at Gaydon. 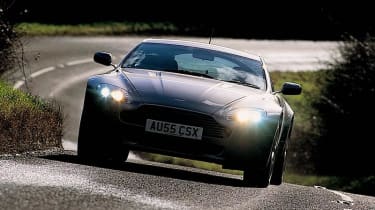 The Aston has been back for a couple of weeks now, following a week-long visit to the factory where its bout of starting maladies was investigated. The engine would start, but would chug away on a handful of cylinders before conking out completely. Naturally the problem was intermittent, hence the lengthy stay at Gaydon. Aston's engineers eventually traced the problem to a failing battery, which was inducing a number of electrical faults that (by design) triggered the V8's 'crash mode', restricting fuel supply to the cylinders. A new battery was all that was needed to resolve the problem. Apparently the original battery had suffered during the first breakdown in Northumberland, and Reg Vardy (who investigated that initial non-starting fault) recharged it rather than replacing it as the factory had requested. The guys at Gaydon were ace throughout the V8's visit, as was Charlie at Stratton Motor Company, keeping me informed on a daily basis and having the courtesy Merc replaced with a Vantage, complete with the number plate AMV 8. Before AU55 was returned, Aston also carried out a slightly early 1000-mile service and sorted a few niggles that I'd mentioned to them, including a squealing driver's door window (door seal replaced), misaligned steering wheel, creaking sat-nav screen and a rear 'wings' badge that was originally stuck to the Aston's rump at what could only be described as a jaunty angle. I'm still surprised at how edgy the Aston feels compared with my 997 S - the opposite of what I was expecting. Although poor motorway surfaces aren't smothered as well, there's more immediately accessible fun to be had. On January's cold, slick roads, burying the throttle a little too early or a little too much (or ideally both) exiting corners in second or third gear gets the tail sliding nicely, the perfectly judged traction control allowing you so much leeway before intervening that I can't see a reason to switch it off on the road. Even in a straight line, full power has the back-end sliding gently through first, second and third gear. Of course, lifting off is not an option because at precisely 4500 revs the entire silencing system appears to fall off and all hell breaks loose. It's utterly irresistible. Until you've heard it, you won't believe the noise this car makes. So worries that owning an Aston would result in the purchase of string-backed driving gloves and stout brogues have disappeared. Instead I appear to have bought an £86,000 Caterham. Lovely. The rear-mounted Graziano gearbox obviously thinks it's in a 1980s Italian supercar, though. It's fine when warm - although never qualifying as more than positive, certainly not slick - but for the first few miles it is, quite frankly, a swine; the change from first to second gear almost requiring two hands. I had a 'They all do that, sir' conversation with Stratton, so I guess I'll just have to lift a few more weights. On a practical note, the Volvo-sourced sat-nav doesn't seem as instantly user-friendly as those systems offered by BMW or Porsche, but I suspect it will prove at least their equal once sussed out. Some of the dash buttons seem a bit small and close to each other, too. The chunky steering wheel gets full marks, though, as do the extremely supportive and comfy heated seats. Finally, just as I was about to press 'send' on this copy, a set of over-mats arrived, compliments of Stratton by way of compensation for the last few weeks' troubles. What nice people.