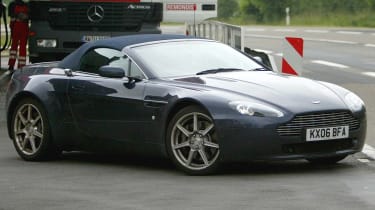 Now that the Aston Martin V8 Vantage coupe has been officially launched, the next variant is a convertible. One prototype was recently caught on photo during tests at Nürburgring while others were sighted at various places in Great Britain. The car is expected to come onto the market within the next six months. Not much is estimated to change during the switch from a hard-top coupe to soft-top cabriolet. The same 380-bhp V8 will be under the hood and it will send the power to the rear wheels through a six-speed manual transmission. According to rumours the car, which is a pure two-seater, will be called V8 Roadster.