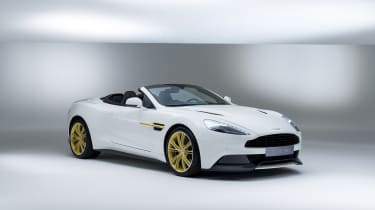 If you’ve not heard of Aston Martin Works then you’ve been out of the loop for a full sixty years now.

Aston Martin hasn’t though, and its Works division has created six bespoke models, all based on the Vanquish in either Coupe or Volante form, to celebrate the anniversary.

The six vehicles are subtly tailored to reflect each of the six decades being celebrated. What each shares are unique yellow side strakes and alloy wheels, and an Aston Martin Works 60th Anniversary logo designed by the firm’s Gaydon team.

More unique still are bespoke rotaries around the major controls in the centre console of each car. The metal for each rotary control is taken from the piston of a car from Aston Martin’s heritage – from a 1955-1965 DB 2/4 Mk II saloon and a 1965 DB5, to the original Vanquish.

The metal, taken from pistons sourced from cars whose engines have been rebuilt at some point, is then laser etched with the Works’ Anniversary wording.

‘We’re all very happy with the end result and we’ve already taken a number of orders from collectors keen to own a piece of the brand’s history,’ explained Paul Spires, Aston Martin Works Commercial Director. ‘This project has been a harmonious co-operation across the whole business, developed uniquely to celebrate 60 years of Aston Martin Works at Newport Pagnell.’

Prices for the 60th Anniversary models are available upon application, and models will be built and delivered to customers throughout 2015.