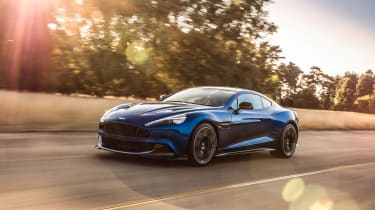 If you’d forgotten about the Aston Martin Vanquish amid all the coverage of the new DB11, then Aston itself certainly hasn’t – and the new Vanquish S takes the model’s performance to even greater heights. The new model is available as a coupe and as a drop-top Volante, too.

Peak power is developed at a round 7000rpm, while 465lb ft of torque is on tap at 5500rpm. A small on-paper performance increase highlights the benefits of the changes, with the 0-62mph time dropping to 3.5sec from 3.8. Top speed remains the same at a claimed 201mph.

The Vanquish S’s sprinting abilities also come courtesy of revisions to the “Touchtronic III” eight-speed automatic transmission, which gets faster gearshifts, and calibration changes to smooth out low-speed driving. A limited-slip differential and launch control are both standard.

Owners can further enhance the S’s styling with a set of carbonfibre bonnet louvres, five-spoke forged and diamond-turned 20in alloy wheels, and a choice of graphics packs, as well as a carbonfibre roof panel, side strakes, door mirror caps and door handles. Quad exhaust outlets separate the S from the regular Vanquish.

Carbonfibre also finds its way into the cabin in the form of an optional centre console panel. Alcantara trim is standard, while various personalised leather trim and embroidery options let customers pick their own look.