Official pictures of the Aston Martin V12 Zagato revealed. Three times the cost of V12 Vantage it's based on... 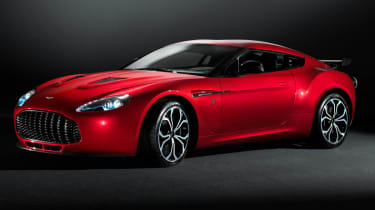 Aston Martin has revealed the production version of its V12 Zagato supercar. Just 150 examples will be built, each costing an eye watering £330,000 plus local taxes. In the UK, that equals £396,000. That’s three times the cost of the V12 Vantage the Zagato is based on, with its 510bhp/420lb ft 5.9-litre V12 engine unchanged. The extra cash is spent on a painstaking makeover, with around 2000 hours spent crafting the Zagato at Aston’s Gaydon base.  It’s certainly more eye-grabbing than the V12 Vantage, its hand-crafted aluminium body boasting a double bubble roof and plenty of intricate carbonfibre addenda, the front splitter, rear diffuser and spoiler the most dramatic details. The showroom-spec Aston Martin V12 Zagato will be displayed at the 2012 Geneva motor show in March, with the first customers receiving their cars in the autumn.

Video of the Aston Martin V12 Zagato competing at the Nurburgring...