Italian coachbuilder Zagato, has created a one-off Shooting Brake, based on the Virage. Pictures and details here 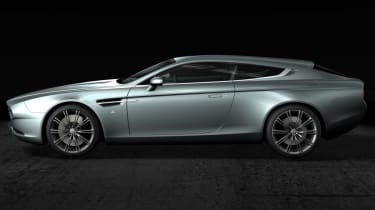 Zagato has revealed a new one off Aston Martin called the Virage Shooting Brake, built as the third and final car produced to celebrate 100 years of the British carmaker. Commissioned by a European customer, the Virage based car will be shown to the public at the 2014 Chantilly Arts and Elegance event.

The Zagato’s design takes inspiration from the Aston Martin V8 Vantage and Volante of the mid 80s, borrowing its boxy shape and lengthy stance to create a retro themed exterior. Up front a long bonnet heads a steeply raked windscreen, with a lengthy roof swooping downwards towards the abrupt shooting brake style rear end. In traditional Zagato fashion the roof features two slim dips, harking back to the double-bubble design featured on Zagato’s famous creations.

Under the bonnet is the same 490bhp 6-litre V12 as a normal Virage, now discontinued, capable of pushing the undoubtedly lighter standard car from 0-62 in 4.1sec and onto 183mph. With that in mind, the Volante should at least possess the potential to complete the same sprint in under 5.0sec.

As the final car in Zagato Atelier’s Aston Martin centenary celebration, the Virage Shooting Brake comes after the DB9 Spider Zagato Centennial and DBS Coupe Zagato Centennial, which were both unveiled in 2013. Zagato also pulled the covers off its Lamborghini 5-95 Zagato in spring 2014, making the Virage Shooting Brake the second project of 2014 for the Italian coachbuilder.