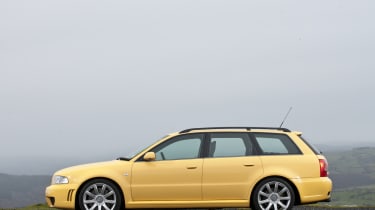 If BMW’s M division is a toned and trim athlete and Mercedes-Benz AMG is the rowdy hooligan, Audi’s RS offshoot could be thought of as the sensible, understated parent figure.

Audi’s quattro GmbH division was formed in 1983, at first merely selling Audi accessories and branded merchandise. While the organisation was involved in the production of the groundbreaking Audi RS 2 in 1994 along with Porsche, it was not until the arrival of the S6 Plus in 1996 that quattro GmbH independently produced its first model.

Since then, quattro has been involved in nearly every fast Audi’s production, including the mighty R8 and supremely capable RS 4 and RS 6 load luggers. Historically, quattro GmbH only produced one RS variant at a time, but with this policy abandoned and with some models rolling off the production line simultaneously, higher production numbers have made certain Racing Sport models more affordable.

Offering solid construction and classy interiors (if sometimes at the expense of a playful or involving chassis), we look at some of the most affordable RS models to grace the UK classifieds. 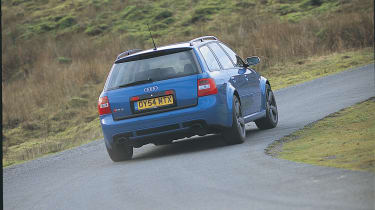 The third car to be produced by quattro GmbH remains one of the most visually striking. A six-speed manual gearbox allowed all 375bhp from its 2.7-litre V6 biturbo to be transferred to the road, while the aluminium mirror caps and bulbous arches started an RS trend that continues to this day. Offering effortless practical pace, this model had a reputation for bending wheel rims, with many owners opting to repair them under warranty or replace them entirely. Not as agile as other sports cars, but then again you can’t fit nearly as much in an E46 M3 or C32 AMG.

The original RS4 is beginning to climb in value, with models priced in the mid-to-late teens offering a clean, well-documented slice of fast Audi ownership. With the last models arriving in 2002, look out for lacquer peel and rust spots as on any other car of this age.

Find Audi RS4s for sale on Classic and Performance Car 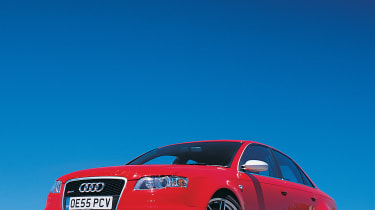 With two wide oval pipes at either side of the rear bumper married to unassuming estate bodywork, the RS6 shares its little brother’s stealthy approach. But with a 4.2-litre bi-turbo V8 generating 444bhp and 413lb ft on board, its soundtrack is anything but unnoticeable. If you can look past the slightly numb steering, you’ll find a comfortable continent-crusher.

Prices for these models vary wildly, with private sellers offering them for under £10k. The gearboxes fitted to RS 6s of this era had a habit of failing, so make sure that a replacement or repair has been carried out on the model you’re looking at. Models priced in the low teens come from specialists, with the limited-edition RS 6 plus in this bracket capable of 174mph and 480bhp.

Find Audi RS6s for sale on Classic and Performance Car