Used AMGs can make for surprisingly affordable performance cars - to buy, at least... 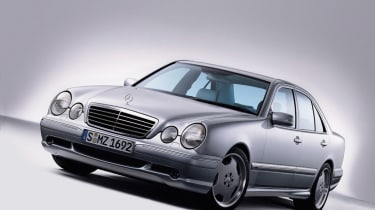 AMG, or Aufrecht, Melcher and Großaspach (named after the company's two founders and Hans Werner Aufrecht's birth town) began as an engine builder in 1967.

Working on Mercedes-Benz cars, the automaker's vehicles and racing program gradually developed closer links and by 1990, Daimler AG took a controlling interest in the company. By 2005, AMG became a wholly-owned subsidiary of Daimler – though official AMG production cars stretch back to 1993 with the C-class based C36.

Now, those early AMGs are conspicuous performance bargains, boasting mighty engines – with comfortable cabins and continent-crossing ability – for the kind of money you'd associate with a lightly-used Dacia Sandero.

As ever, one must tread wisely, but buy smart and these understated evo heroes can be yours for very little outlay. 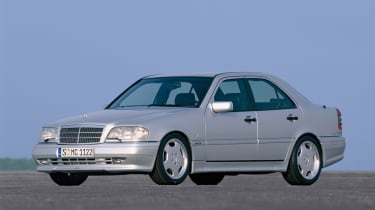 The first officially-sanctioned AMG is also one of the cheapest to buy nowadays. Based on the W202-generation C-class that debuted in 1993, the AMG version followed in 1995. The C280’s 2.8-litre inline-six block formed the basis of AMG’s hand-built engine, bored out to 3.6 litres.

The result was 276bhp at 5750rpm and 284lb ft delivered at 4000rpm. Unfortunately, the driver’s only method of gear selection was an archaic 4-speed automatic transmission, so lazy performance rather than incisive control was the order of the day.

Now, it’s possible to find C36s for under £3000, though it’s wise to spend a little more to find a fully-serviced example. Bear in mind that low prices are no guarantee of low running costs either: the supercharged lump guzzles fuel (you might just nip 30mpg on a motorway run), parts can be expensive and rust is a constant issue on Mercedes of this era. But it’s handsome and brisk, and prices can’t remain low forever.

Find Mercedes C-class for sale on Classic and Performance Car 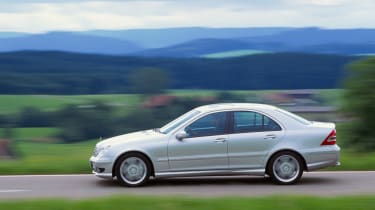 Before you decry AMG’s recent decision to downsize engines and introduce turbocharging to chase power gains, remember that a similar strategy was also implemented a decade ago with the C32 AMG.

The W203-generation C-class featured much more rounded styling than its predecessor – not universally appreciated, it has to be said – and the outgoing C43 AMG’s V8 made way for a supercharged V6. As with the latest turbo AMGs though, what the C32 lacked in aural joy it made up for in power: 349bhp and 332lb ft of torque, to be precise.

evo first drove the C32 in issue 31, giving it a solid four-star score. We called it ‘fast and largely flawless’, with the caveat that it was a little too grown-up to match the fun of BMW’s M3. Prices begin at around £4,000, and as a newer car than the C36 it’s easier to come across one with history. Early niggles should now be sorted, but rust is once again an issue.

Find Mercedes C-class for sale on Classic and Performance Car 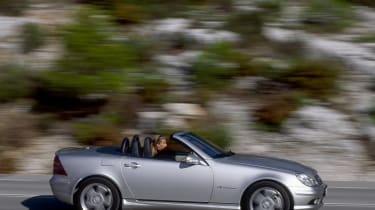 We first drove the SLK32 AMG in the same issue as the C32 saloon. We gave it the same four-star score too, though its character was distinctly different from that of the C-class despite its identical powertrain.

Instead, treat it as the ‘good-looking hot rod’ we described it as, enjoy the performance – 5.2 seconds to 62mph is still quick by modern standards – and you’ll have a fun weekend toy. That hard folding roof should still work too… no, it really should, as repairs aren’t cheap unless you’re handy with a spanner. Oh, and like other Mercedes of the era, SLKs rust like a trawler in the Bering sea.

Find Mercedes SLKs for sale on Classic and Performance Car