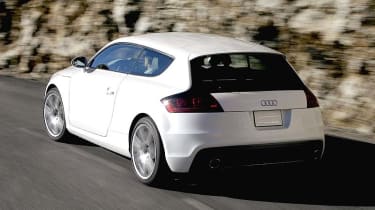 Well, this is all a bit odd. Here I am thundering down a mountainside an hour north of Nice in an Audi concept car. The oddness stems from the fact that prototypes worth half-a-million euros or so, if driven at all by the press, are usually presented in tightly controlled conditions within a very confined area, and there's always a minder in the car to rein-in any over-excitement. Yet currently the posse of Audi bods is a couple of miles back up the mountain and I'm well and truly beyond their line of sight, contending with oncoming traffic, rock faces, Armco and all manner of unpredictable elements.

Then I recall the earlier driver briefing: 'Please do not exceed 80kph.' On this downhill section the speedo has crept up to about 120kph. Oops!

Frankly it doesn't seem worth worrying about. This may be billed as a 'testing the waters' prototype, but it's built around the underpinnings of the forthcoming Audi TT replacement and feels as solid as though it had just trundled off the production line. Sure, there are non-functional parts of the Shooting Brake - the handbrake, the infotainment console - but in other respects you feel as though you don't have to make many allowances for its prototype status.

Why Audi is being quite so forthcoming with this car is hard to determine. The concept received rave reviews when it was shown at Tokyo last October and will doubtless draw the crowds at its European debut in Geneva. Surely Audi isn't having last-minute nerves about the car's shooting brake bodystyle and needs the reassurance of a few more positive headlines? Perhaps the boys from Ingolstadt simply want to ram home the point that this is a separate model to the next-generation TT.

The aluminium-bodied Shooting Brake is a good-looking thing, its extended roofline and squat stance making it seem like the long-lost heir to the original quattro. Its mechanical spec has a touch of the icon about it too, with the 247bhp, 3.2-litre V6 engine from the current TT and Golf R32 under the bonnet and a rear-biased four-wheel-drive system to spice up the handling over what the current TT offers (in common with all new-wave performance Audis, torque is split 40:60). Behind 19in alloys nicked from the new RS4, the Shooting Brake has ceramic discs, though cost will doubtless rule these out from any production version of the car. What is likely to be on the final model - though it's not on the concept car - is a new form of damping control, where the viscosity of the damper fluid is controlled by an electromagnetic field.

Not that there seems much wrong with the conventional dampers found here; yes, the ride is stiff, but it's generally on a par with any other sports car capable of 0-62mph in 6.0sec. More worthy of comment is the speed-sensitive electromechanical steering, which is light yet accurate and easy to come to terms with, although let's hope the production version arrives with more 'meat' to it.

The engine's glorious. It picks up heartily from the lower mid-range and emits a bassy growl that you hope will make it past the noise emissions test when it comes to homologation time. Without doubt it's a hard-hitting motor, so it seems a shame that it revs round to just 6500rpm before the red paint tells you it's time to shift up.

Even though this is just a concept car and therefore not truly representative of a production machine, the signs seem promising for the next TT. As for the idea of the Shooting Brake, the extra rear headroom and luggage space should broaden the appeal of the TT range even further.