Audi A1 TDI with free tax 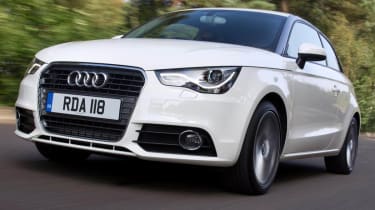 Audi has announced tweaks to the already frugal A1 TDI which realise greater fuel economy and a lower CO2 output making the supermini both London congestion charge exempt and Vehicle Excise Duty (VED) exempt from year 2 onwards, as the duty bandings currently stand. Stats of 74.3mpg and 99g/km CO2 are the headline figures for the A1 diesel, both of which come via Audi engineers fiddling with the fuel system and engine management to achieve the 3.7mpg economy increase and 6g/km CO2 emissions drop, aided further by engine start-stop and energy recuperation systems. Performance is unchanged with the 0-62mph dash taking 10.5sec and a top speed of 118mph.  Prices also remain unchanged for the A1 lineup, with the SE, Sport and S line models ranging from £14,480 to £17,865 OTR with features common to all including alloy wheels, remote central locking, air conditioning, iPod connectivity and a 6.5-inch retractable display.