Audi has cancelled plans to launch a long-awaited A2 replacement 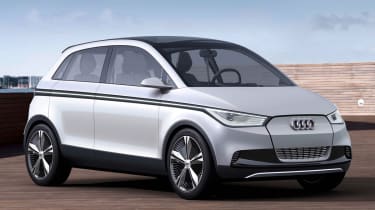 Audi has dropped plans to launch a new range-extender electric car that was to see the long-awaited return of the compact A2. The new model would have competed against BMW’s i3 in the small premium electric car class.

The German manufacturer was planning to launch the model in both fully electric and range-extender hybrid guises by 2015, with a concept being unveiled at the 2011 Frankfurt motor show. Featuring a double skinned aluminium floorpan to house the battery packs, and a 116bhp and 199lb ft electric motor, the concept was the amalgamation of Audi's latest technology.

As it stands, electric car sales have been slow around the world, and Audi’s executives don’t think that such a model is viable – at least not yet.

The original A2 was revolutionary in many ways, including clever use of aluminium to keep weight down, and very slippery aerodynamics – a CD of . The launch of the super economical ‘3L’ model (Germany only) proved that with clever tweaking, a car’s efficiency could be dramatically improved – and this 1.2-litre diesel could manage a genuine 94mpg.