MTM Audi A1 quattro brings Group B back 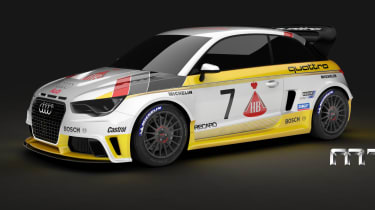 Rallying’s Group B regulations were short lived but their impact has inspired generations of rally fans since.

Sadly, we’re unlikely to see a return to such freedom in regulations as spawned those mid-1980s monsters, but through the medium of aftermarket tuning we can at least get close.

Respected Audi tuner MTM has conceptualised just such a car in the form of the MTM A1 quattro Group B. The iconic colour scheme of the firm’s renders is something of a giveaway as to its inspiration, but there’s more to the car than an iconic yellow and white livery.

The A1’s belligerent bodywork additions are the work of designer Roland Hall from South Carolina, and are not just a homage to 1980s rallying but directly influenced by Group B regulations.

At the moment, the project is still on the drawing table – but MTM has already penciled in a 421bhp engine. MTM chief executive Roland Mayer even suggests a 444bhp version, or the 493bhp 2.5-litre unit as fitted to MTM’s 201mph A1 Nardo Edition. A sequential gearbox might also be on the cards.

‘I could manufacture a small production batch if I could find ten enthusiasts who were prepared to pay around €120,000’ Mayer said, adding ‘there would be full certification for road use as an added incentive.’

It might not be enough to bring Group B back, but MTM’s Audi A1 might be as close as you’ll get without shelling out for one of the original street versions.