Estate A4 gets new look and layout 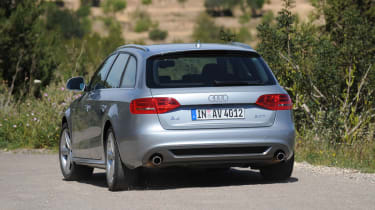 OK, it’s just a new-generation Audi A4 with a more useful tail. It’s a good-looking tail, true, into which the A4’s ‘tornado line’ – that’s the ridge along the midriff in Audi designer-speak – flows rather satisfyingly. And the A4 Avant does have the most load space in its class, which excludes those nasty Fords, Citroens, Volkswagens, etc, because they aren’t premium. And in the mind of the Audi buyer, premium is all and emperors wear new clothes.

The Avant isn’t as good an estate car as it could be, though, because the rear seat cushion doesn’t fold out of the way to let the backrests fall down further. Result: a floor higher and slopier than it should be. Still, as a load-carrier it’s not bad.

But what we really want to know is whether it’s a decent drive at the same time. First the A5 and then the A4 gained Audi’s new-philosophy disposition of engine and chassis, with the diff where the clutch used to be and the front wheels moved about six inches forward accordingly. Result: a shorter front overhang than before and a less nose-heavy weight distribution. Bringing the rack nearer to the hub-carriers, via shorter, stiffer steering arms, has helped sharpen things up, too.

Or so we were promised. First impressions of the A5 suggested a minimal improvement, thanks to the intervention of Audi’s marketing department, which didn’t want to alienate existing buyers. These A4 Avants, however, do feel quite sharp, with a keen turn-in and a positive, mechanical feel to the handling overall. The steering still feels artificial, though, even if the optional ‘Active Drive’ variable-ratio steering feels less unnatural than BMW’s similar system.

As ever, the smaller-engined, front-drive versions seem wieldier and purer in their responses than the tech-laden quattro V6s, 40:60 front:rear torque-split or not. All ride better than expected, but the star is the new 1.8 TFSI with 158bhp and a sweetly-delivered wash of turbo torque. It’s all you need.