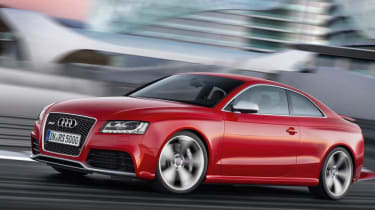 This morning we had leaked images of the RS5 and guessed at what it might be powered by and how it would perform. This afternoon we know. Yep, Audi has caved into pressure and released full details of its Geneva show star.

As we suspected, it uses the normally aspirated V8 from the R8 and RS4, but there are more substantial power gains than we expected – the RS5 develops 444bhp. Audi’s statement didn’t make any references to performance figures or weight, but the combination of 444bhp, 4wd and DSG means it’s feasible that the RS5 could complete 0-60mph in close to 4.0secs flat.

The extra power has been liberated thanks to fine tuning of the dual branch intake and exhaust system. Power arrives at 8250rpm, 450rpm later than the RS4’s 414bhp, while torque is unchanged at 317lb ft, although rather than peaking at 5500rpm, it’s now available across a plateau from 4000-6000rpm. As we suggested in our earlier news story, the emissions have also been cleaned up: there’s no mention of CO2, but a combined economy figure of 26.2mpg isn’t to be taken lightly.

There’s also a new crown gear centre differential – we’re not yet sure exactly how this works, but apparently it’s light, compact and allows up to 85per cent of the torque to be sent to the rear wheels. Alternatively 70 per cent can be sent to the fronts, but we’re not so bothered about that. In everyday driving the RS5 has the same 40:60 ratio as the RS4, and it also sports electronic torque vectoring – a flash name for ESP that can brake a spinning inside wheel.

The RS5 rides 200mm lower than a standard A5 and is fitted with 19-inch wheels as standard. 20s are optional, as are ceramic brakes and apparently you can opt to have the differential mounted between the rear wheels. Not quite sure if that’s in addition to the centre diff or not.

But anyway, combine all this with ESP that can be fully disabled and the RS5 sounds like a proper hardcore sports coupe, one fully able to take the fight to the M3 – and possibly even the mighty Nissan GT-R. It'll match the latter on price, costing around £58,500 when it comes to the UK in October.

Can’t wait to find out more at Geneva.