You'll have to squint to see the visual changes, but the lighter new A5 should drive better than its predecessor 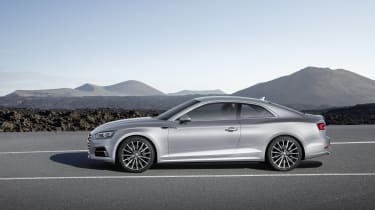 Audi has pulled the wraps off its latest BMW 4-series and Mercedes C-class coupe competitor, the A5.

Based on the same new architecture as the A4 launched last year, its evolutionary styling hides a healthy weight reduction, improved aerodynamics and a wealth of extra technological features compared to its predecessor.

If you weren’t a fan of the previous A5 then little about the new car’s styling will convince you to take the plunge with the latest car. Audi admits that it chose to refine the existing car’s styling rather than start afresh, despite the new platform, but only when placing old and new side-by-side are you likely to spot any real changes.

Audi’s aim is to ‘honour the design we have, but sharpen it’. The new front grille is wider, more square in appearance, and mounted closer to the road than before (and compared to the A4), and sharp creases flow from it onto the clamshell bonnet. Designers have maintained the sweeping ‘wave-shaped’ shoulder line of the old car but this too is sharper than before, owing to improvements in production techniques.

There are changes at the back too, with slimmer LED-laden tail lights, more pronounced surfaces to the boot lid and a diffuser element, which Audi concedes is more for styling than it is an aerodynamic device. Even so, the refined styling gives the A5 a drag coefficient of only 0.25.

The S5 follows a familiar theme: brushed aluminium features heavily, in front and rear bumper elements, on the door mirrors (now mounted on the shoulder line rather than in-line with the window - better aero, neater styling and less noise, says Audi) and 19-inch alloy wheels. In the metal these 19s actually look a bit small, but a 20-inch option will be available shortly after launch.

While the body is made from steel - pressing some of those creases just isn’t possible in aluminium - Audi’s use of aluminium in the chassis and high-strength steel in appropriate areas means the new car is up to 60kg lighter than before. In the S5, the new 3-litre engine alone contributes 14kg of the weight saving next to the old car.

At a pre-viewing event before the A5’s launch, Audi told evo that the S5 model will be a little sharper to drive than the S4, with slightly different suspension tuning to account for the two-door body. Electronic systems - including Audi’s Drive Select system - are slightly different for the same reason, but don’t expect any less intervention from the ESP. 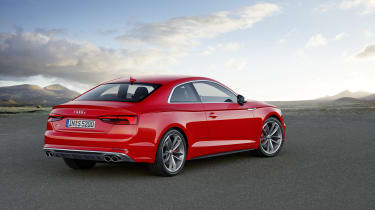 UK engine options haven’t been confirmed, but in Europe the A5 will launch with two TFSI petrols and three TDI diesels, putting between 188bhp and 282bhp to the road while drinking up to 22 per cent less fuel.

Manual and automatic transmissions are available depending on the model, as is quattro all-wheel drive - though Audi’s new ‘quattro Ultra’ system will be relegated to the 2-litre, manual-transmission models alone, due to packaging constraints.

Like the S4, the S5 gets Audi’s all-new 3-litre TFSI V6. While similar in capacity to the outgoing S5 it’s an all-new unit. Its turbocharger and catalytic converter are both mounted within the vee of its six cylinders (known as a ‘hot-V’) for improved throttle response and emission controls. Maximum output is 349bhp (the old car was 328bhp) and, as per the S4, its torque output of 368lb ft is developed between 1300-4500rpm.

Expect a 4.7-second 0-62mph sprint (identical to the S4) and an electronically-limited 155mph. The sole transmission is an eight-speed Tiptronic auto.

If you’re familiar with the new A4 and S4’s cabin, then you’ll be familiar with the A5 and S5. The same horizontal architecture is present and correct, and like the A4 range the A5 is now available with Audi’s Virtual Cockpit, a 12.3-inch TFT screen replacing the traditional instruments. A separate 8.3in display appears in the centre console.

Opt for MMI navigation plus and the A5 also comes with Audi Connect, with LTE broadband wireless internet, integrated wi-fi hotspot and various assistance services. 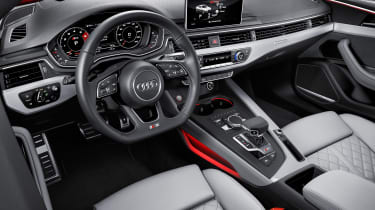 On-sale date, A5 Sportback and Cabrio

The new A5 hits the UK in November. No official pricing information has been confirmed, but we’re expecting the entry-level petrol models to start from just north of £32,000, similar to the outgoing car. The previous S5 started at just under £44,000, so expect this ballpark figure for the new car.

As for other models, we can expect to see the new A5 Sportback make its debut at the Paris motor show in early October and to hit dealerships in early 2017. The A5 convertible will come along a bit later: we should see it in early 2017, with deliveries in the spring.

As ever, we can also expect S5 versions of each, priced in proportion to the coupe model. Audi refused to give any further details on the Sportback - which shouldn’t differ in styling too much from the new coupe.