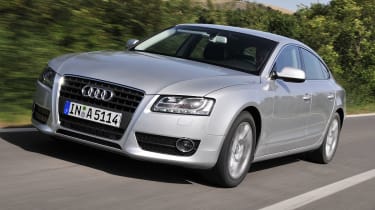 Amidst the A4, the A4 Avant and the A5 coupe, there doesn’t appear to be much leeway for an additional family member, but the marketing people at Ingolstadt disagree. Their ravenous pursuit of greater market share has led them to this: the front end of an A5 coupe mated to a longer fastback body with four seats and a hatchback tail – the A5 Sportback.

Two things set alarm bells ringing. Firstly, this 3.2 V6, complete with S-tronic gearbox and quattro drivetrain, is no faster to 62mph than the 2.0 TFSI version. Secondly, it produces less torque than the four-cylinder, so although it’s commendably refined and respectably flexible at motorway speeds, it generally feels lethargic, even with the slick seven-speed twin-clutch ’box slipping through the cogs. The 3.0 TDI is an infinitely better choice.

The ‘adaptive dynamics’ system fitted to our test car doesn’t help the Sportback’s cause much either. The steering is light and curiously artificial in Comfort, then weights up enormously in Dynamic, where the ride becomes very unyielding.

At least you get a finely detailed, driver-focused cockpit, and as long as you’re prepared to sacrifice a little headroom, the legroom in the back is the equal of an A4. And that hatchback is practical too. But all said and done, the A5 Sportback doesn’t rank alongside Audi’s recent successes.