Topless A5 here in spring 2009; S5 version gets a new engine 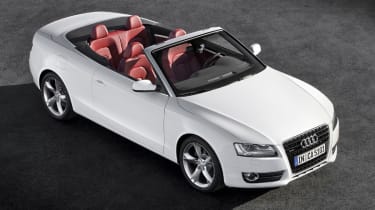 Obviously looking forward to the summer, Audi has released details of a new convertible. The A5 Cabriolet replaces the A4 drop-top and brings plenty of all-season trickery, including neck-warmers and special leather that doesn’t get scorching hot if left exposed to the sun.

There’s not a folding metal roof in sight, though, Audi saying that a fabric top fits the design profile better as well as making the car lighter and giving it a lower centre of gravity.

Five engines are available for the A5 – three petrols and two diesels, offering between 178 and 261bhp – and three different transmissions will be offered: a standard six-speed manual plus Audi’s seven-speed S-tronic double-clutcher and its ‘Multitronic’ CVT auto. The base cars are front-wheel drive, while the bigger engined ones get the quattro all-wheel-drive system.

Sitting above the five A5 Cabriolets will be an S5 version, which will come with S‑tronic as standard (there’s no word as yet on whether a manual version will be available). It will also get the 3-litre supercharged V6 from the new Audi S4. That means 328bhp and 325lb ft, which enables the heavier drop-top to clear 62mph in 5.6sec.

The S5 coupe does without the cleaner, torquier six-cylinder for now, although sources at Audi say it can be logically assumed that its 4.2-litre V8 will be replaced by the supercharged 3-litre in due course.

Order books for the A5 Cabriolet open early in 2009, with deliveries around springtime. Prices should kick off just below £30,000 for a 2-litre A5, with the S5 cabriolet commanding around £43K.