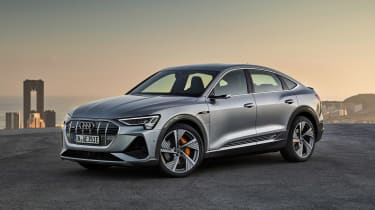 The all-electric E-tron SUV has been with us for a little over a year now, a model that marked the beginning of Ingolstadt’s EVs offensive. The second of the series has now arrived, in the form of a sleeker, coupe-styled E-tron. UK prices are still to be confirmed, but expect them to sit marginally higher than for the standard E-tron. Order books open at the end of the month and first cars will hit the road in Spring next year.

As with many coupe SUVs, the E-tron Sportback sacrifices function for form, lowering height and adding a sloping roofline for a more sporty, coupe appearance. Practicality hasn’t taken too much of a hit, though, as just 20mm of headroom has been lost with the design changes, and the model receives unexpected improvements in other areas.

Though admittedly marginal gains, drag coefficient now sits at an improved 0.25 over that of the standard car, giving the Sportback increased efficiency for a 6.2-mile (WLTP) increase in range, bringing the total to 278 miles. Though a respectable figure, this only just puts it in line with the Mercedes-Benz EQC, below the 298 miles of the Jaguar I-Pace and significantly under the quoted 370 miles of the new Ford Mustang Mach-E.

As you’d expect, specs remain similar to those of the standard E-tron, with power output for the 55 model sitting at 396bhp and 414lb ft, with an eight-second boost offering an extra 76lb ft (490 in total) for a 0-62mph sprint of 5.7sec. Meanwhile, top speed is 124mph. Though a cheaper, less powerful 50 variant will arrive soon, the 55 sports an asynchronous electric motor on each axle, powered by a 95kWh battery pack. 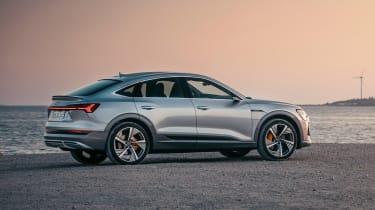 Kerb weight for the Sportback hasn’t been quoted, but we don’t expect to see much change from the rather hefty 2498kg figure of the standard car – to soften the blow, this mass is distributed almost perfectly across both axles, with a near-50:50 ratio. Helping improve ride comfort is Audi’s air suspension, with a 75mm range of movement allowing it to adapt to road conditions.

Features specific to the E-tron Sportback are trick new digital matrix LED headlights, coming as standard for the first time in a mass-produced vehicle – in simple terms, the technology turns headlights into high-tech projectors, allowing the beam to be directed precisely where it’s needed, and away from where it’s not. A larger 22-inch wheel option is also available as an option on the Sportback, larger than on the standard car, as is a new Plasma Blue metallic paint scheme.

> New Audi e-tron review – heavyweight electric SUV is fast, but not much fun

The same rear light bar and 20-inch wheels come as standard, alongside a host of optional extras such as virtual mirrors and an uprated Bang & Olufsen sound system. Inside, you’ll find a 12.3-inch virtual cockpit, and dual-display infotainment system comprised of 12.1- and 8.6-inch displays. Should you want to make things easy for yourself, the limited-run ‘Edition one’ comes with a handful of optional extras as standard, from the panoramic sunroof to virtual mirrors and more.