All-new from the ground up, Audi’s popular Q3 compact SUV broadens its appeal 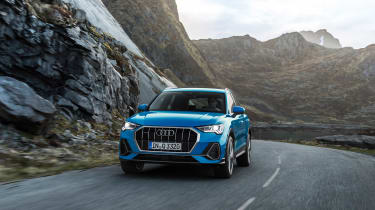 Another month, another premium compact SUV. The huge popularity, not to mention profit margins, of cars like the Audi Q3 have made them a crucial part of manufacturer strategies moving forward but staying competitive in a fast-moving market like this isn’t easy. Say hello, then, to the all-new Audi Q3, a compact SUV designed to take on the BMW X1, Mercedes GLA and Volvo XC40.

So it’s more of the same in many respects but there is a reason that the new Audi Q3 is of extra interest to us, and that’s the chance that Audi might eventually surprise us with a second generation RS Q3, a previous evo favourite that had no right be as entertaining as it was.

> Click here for our look at the new BMW X1

Under its new skin, the Q3 utilises a (very) familiar set of components, a MacPherson strut front, and four-link rear suspension set-up supporting the new body. The new Q3 is slightly longer (+97mm) and wider (+18mm), but also lower (-5mm) than the outgoing model, leaving a little more breathing space between it and the smaller Q2. Like the Q2, and pretty much all compact VW Group models, the new Q3 moves across to the MQB platform.

Engines are typical of the class today, made up of four four-cylinder units at launch, with an emphasis towards petrol, rather than diesel. Petrols are made up of turbocharged 1.5- and 2-litre units, the more powerful 2.0-litre options available exclusively with quattro all-wheel drive and a seven-speed S-tronic dual-clutch gearbox. Power figures sit at 148bhp for the smaller engine and either 187bhp or 227bhp for the 2.0-litre unit. The sole diesel at launch will be a 187bhp 2-litre diesel, initially only available with a six-speed manual and quattro, although an S-Tronic auto will be available later in the year.

The bodywork itself is instantly recognisable as a new-gen Audi, dominated by the same eight-sided grille design as seen on the new Q8. LED headlights are now standard fit, with optional matrix units topping the range and bringing a similar lighting graphic to the one on the brand new Audi A1. The Q3’s overall silhouette is similar to before, but the bodywork itself has taken on a blockier, more aggressive stance, with typically crisp crease lines and heavily emphasised wheel arches drawing inspiration from the Audi Quattro.

> Click here for our review of the previous Audi RS Q3

Inside, Audi has taken a bigger step, completely redesigning the interior’s layout. The control interface is now focused around Audi’s latest MMI Touch infotainment system, replacing the aging click-wheel system used on the previous model. As standard, the Q3 has a 8.8-inch screen but this can, of course, be upgraded to the 10.25-inch setup seen further up the Audi range. The new Q3 also features Audi’s 10.1-inch Virtual Cockpit as standard, while the full-sized 12.3-inch unit is on the options list. Also on the options list are the usual combination of different wheel designs in sizes up to 20-inches, plus the adaptive dampers required to fix the ride quality you’ve probably ruined with those super-sized rims.

But the standard Q3, as popular as it will inevitably be, is not the whole story. Audi Q3 prototypes featuring the tell-tale signs of large wheels, quad exhausts and meaty brakes all point towards an imminent S Q3 model, while a second-generation RS Q3 will hopefully also one day make an appearance. For now though, the standard Q3 will arrive in showrooms in November this year, with the S Q3 likely to show up later in 2019.