Audi adds more power and exterior options to its baby SUV, but do you need it? 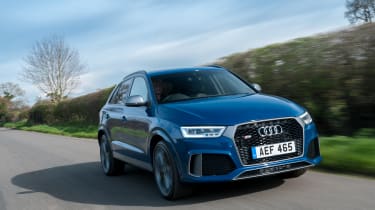 Since its launch three years ago, the Audi RS Q3 has continued to surprise us with just how enjoyable a hot hatch on stilts can be. Conversely, the closely related RS3 Sportback, which has largely the same engine but a more conventional ride-height, has left us underwhelmed.

At £49,185, the RS Q3 Performance isn't cheap, but an exciting engine, more power and decent dynamics might just make it the pick of the bunch when it comes to small and fast SUVs.

Where the RS3 has had the edge, however, is in terms of power, with a 27bhp advantage. But now, thanks to a new ‘Performance’ variant of the RS Q3, the SUV can be ordered with an identical power output to the hatch. The extra grunt required to take the charismatic, warbling five-cylinder turbocharged engine from 335bhp to 362bhp has been liberated thanks to extra cooling from the radiator, a modified fuel pump and a new map. In addition to the extra power, the RS Q3 Performance gets darker exterior trim (less flashy than the glitzy aluminium on the standard car), a set of bespoke 20-inch alloys and a new colour option – metallic Ascari Blue, as pictured here. 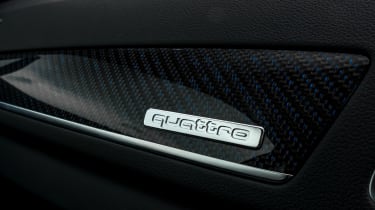 So, does a power hike dull the junior SUV’s charms and turn it into just a savagely fast but blunt instrument, like the RS3? Simply put, no. The increased performance isn’t particularly noticeable, but what remains is a truly entertaining drive, if not the last word in sophistication.

As seems appropriate for a high-riding SUV, there’s plenty of pitch and roll. But rather than making the RS Q3 feel cumbersome and heavy, the roll simply acts as a barometer for how hard you’re driving. The exaggerated body movements are most noticeable on initial steering inputs, but as the suspension gets further into its travel, it firms up to keep excessive roll at bay. This results in a robust yet comfortable ride, the body well supported without ever feeling wayward.

On particularly rough roads, any unloaded wheels can develop an unpleasant resonance. This is most noticeable at the front as a vibration sent through to the steering wheel, and while it can only be felt occasionally, it’s a shame, as it’s at odds with just how controlled the suspension feels most of the time.

The RS Q3 relishes being driven aggressively, making the most of the weight transfer that the suspension allows. Getting hard on the brakes into a corner loads up the front tyres nicely while making the rear feel nimble. Get back on the power aggressively and the weight then shifts dramatically to the rear. Just as it does so, the Haldex four-wheel-drive system sends torque rearwards, and drive to the back wheels engages exactly when you want it there, really helping to propel the car out of a corner. Not only does this all feel cohesive and perfectly judged, it’s also engaging and allows a certain degree of adjustability, too. 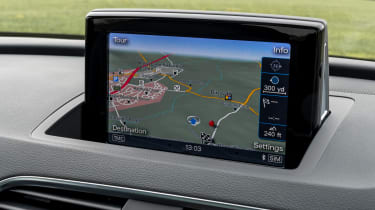 It’s in slower, second-gear corners where you get the most from the RS Q3. Sadly, the seven-speed S-tronic gearbox is often reluctant to change down into second; some of the time it simply doesn’t engage before a bend and you have to settle for third. There’s still enough torque available for the car to not feel too sluggish out of the corner when this happens, but the acceleration isn’t as savage, you don’t feel the rear axle working quite as hard and it just isn’t as entertaining. What’s more, as the engine sounds best towards the top of its rev range, the soundtrack isn’t as enjoyable either.

In terms of rivals, this is certainly an unusual if not rapidly expanding market. The small performance SUV offerings include the Porsche Macan (which the RS Q3 bests dynamically), or a Mercedes GLA45 AMG. You could consider a Jaguar F-Pace, although it's a step up in terms of size.

The RS Q3 Performance is £3365 dearer than the regular car, and as the changes aren’t that dramatic it does make the cost hard to justify. It is still really enjoyable, however, and now has some aggressive looks to match its monstrous pace.