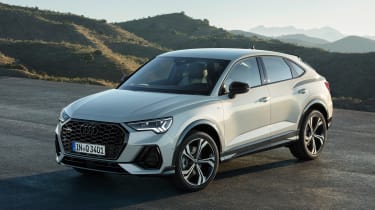 Audi has revealed a new Sportback variant of the Q3 SUV, knocking off a negligible few inches of headroom to create a model that has almost no direct rivals, which says more about its narrow niche than Audi’s quick reactions to an opening in the market. Still, the current Q3 is one of the better-handling compact SUVs on sale right now, and with a hot RS Q3 performance variant on its way later this year, the new Q3 Sportback might actually prove to be more than just a cynical model variant expansion.

The new Q3 Sportback sits 29mm lower than the standard Q3, and is 16mm longer, and oddly 6mm narrower. Headroom shouldn’t be too greatly affected though, as the Q3 Sportback has a marginally lower seating position, and without any dramatic variance in the basic footprint has much the same interior and boot volumes as the standard model.

> Click here for our review of the Audi Q3

Like the standard Q3, the Sportback is based on the widespread MQB platform, and will be powered by a range of four-cylinder petrol and diesel engines. Front-wheel drive will be standard on lower-specification models, but quattro all-wheel drive paired with Audi’s S-tronic dual-clutch transmission will feature on high-powered models. Until the RS Q3 Sportback arrives, the standard range will be topped by the 227bhp 45TFSI.

What’s new is the Sportback’s more aggressive stance and completely redesigned rear end. The styling at the front is identical to that of the standard Q3, bar a new mesh grille pattern replacing the vertical strakes, but at the rear a more complex and dramatic lower bumper treatment sets off the sloping roofline. Typical of this latest generation of Audi design, the wheelarch surrounds and lower bumpers are all available in darker contrasting shades to lighten the body over the larger wheel designs at up to 20 inches.

The interior is also in line with the standard Q3, with some updated graphics on the virtual cockpit and some new interior colour and trim options making up a majority of the changes. With a deep desire to hit every SUV niche possible rife within the wider industry, this sort of model derivative is hardly a surprise in 2019, but if it does in fact drive with more sophistication than the normal Q3, there will be little compromise to fuss over.