Audi Sport’s small performance SUV is back, with the new Audi RS Q3 available in two body styles from early in 2020 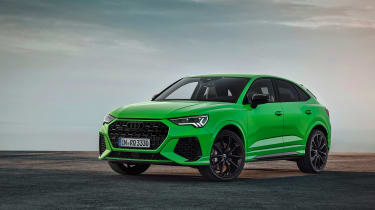 The first Audi RS Q3 was something of an unexpected evo favourite of the period, combining Audi’s brilliant five-cylinder petrol engine and other RS upgrades with the solid but unremarkable Q3 SUV. The Q3 has since been replaced with an all-new model and sure enough, now the RS Q3’s replacement has also arrived - that standard model in tandem with a new Sportback variant.

The engine is again of Audi’s 2.5-litre five-cylinder turbocharged petrol variety, this time with peak power of 394bhp. It’s the same unit found in the recently updated Audi TT RS and RS3, and features the same new aluminium heads contributing to the useful 26kg drop in weight compared to the previous engine. Torque peaks at 354lb, and is spread right across the rev range between 1950 and 5850rpm. Connected to the engine is a seven-speed dual-clutch transmission, and there’s a Haldex-style all-wheel drive system putting it to the ground. 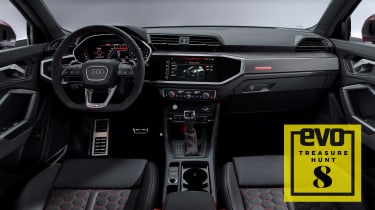 Although the previous RS Q3 should have been the most compromised small Audi Sport model, its extra suspension travel and propensity to let the driver play with the weight balance actually made it quite an entertaining steer for what would otherwise have been a very dull performance compact SUV. This new model will hopefully retain some of this character, although its new MQB-based platform will have contributed to some significant gains in torsional stiffness and the Q3’s overall composure.

On the options list is a set of adaptive dampers that can be added to the RS Q3’s standard sports suspension, something that we fear might be a necessity when on the optional 21-inch wheels (20s are standard). The underlying suspension layout is rather more familiar though, with a multilink rear suspension setup on the rear axle and MacPhersons up front. For the first time, the RS Q3 is also available with optional 380mm carbon ceramic brakes, 375mm steel discs are standard, gripped by six-pot calipers. 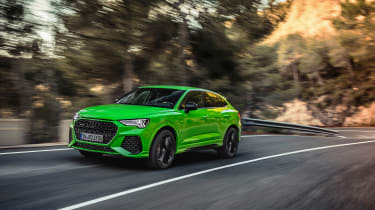 Styling changes follow Audi Sport’s recent trends seen on the RS6 Avant and RS7, with new unframed grille openings topped with a slip vent below the bonnet and large openings on either side framed by silver, black or carbonfibre elements. Both the normal SUV and the Sportback models look identical from the front, but the Sportback’s more rakish rear end also features a dramatic full-width mesh band terminating at the outer edges in upright openings. The classic oval exhaust outlets are fitted to both, mind, sporting an optional valved exhaust system behind to make the most of that warbly five-cylinder engine.

Inside is the usual combination of high quality leather, Alcantara and honeycomb stitching on the seatbacks. The interior is otherwise standard Q3, which although well constructed, lacks the quality of materials expected inside Audi’s interiors. The RS Q3’s digital interfaces are top-notch though, even if it lacks the haptic feedback found on other Audi systems.

Both the RS Q3 and RS Q3 Sportback will go on sale in the first quarter of next year, with finalised UK specifications and prices announced closer to the time.