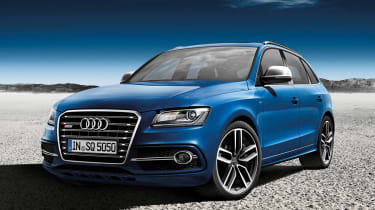 Audi is set to launch the SQ5 ‘Exclusive’ at the Paris motor show, a high-spec limited edition version of the 308bhp diesel SQ5.

The product of Audi’s high performance S division, the SQ5 marks the first time in Audi history that an S model has been fitted with a diesel engine. The 3.0-litre Bi-turbo TDI engine produces 308bhp but more relevantly, 479ft lb of torque – which is delivered between 1450-2800rpm. 0-62mph is dealt with in 5.1secs and the car has a governed top speed of 155mph.

A limited production run of 50 ‘Exclusive’ SQ5s will start in the first quarter of 2013, and the new model will come with unique interior design features along with an exclusive exterior finish.

It’s painted in an Aral Blue ‘crystal effect’ paint, developed specifically for the limited production run and interior highlights include the sports seats, steering wheel and gear lever – which are clad in black Nappa leather – with a contrasting white alcantara headlining.