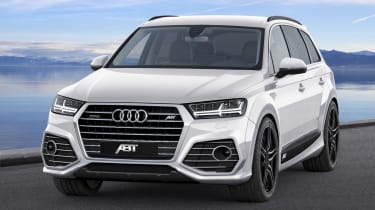 For those who think the 1983mm wide and 5089mm long Audi Q7 isn’t imposing enough, German tuning house ABT Sportsline has created this aggressive styling package. With wider arches, more angular bumpers and a prominent rear wing, the kit gives the new SUV a more performance-focused image. As such, ABT has called it the QS7.

The QS7’s ditches Audi’s factory-fit grille chrome-surround for a colour-coded part, while a new front bumper adds hexagonal intakes. Around the back, chrome surround exhausts are housed either side of a new rear diffuser, and the rear bumper itself is more angular. It reaches around into the car’s wider arch add-ons (available as optional extras), which sit over ABT’s 22-inch FR wheels. 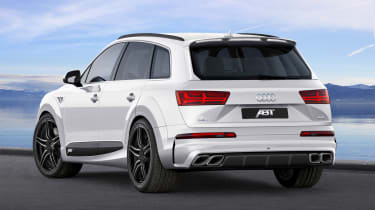 Features like that four-armed rear wing (also optional) and new front wing vents suggest the car has received performance upgrades too, but ABT says that engine modifications won’t be available for some time. ABT’s work with the previous Q7 upped the power of its TDI engine to 268bhp and torque to 428lb ft, but given that this new model’s 3-litre TDI V6 engine produces 268bhp and 442lb ft of torque as standard, it’s safe to assume those numbers will be dwarfed.

Until the power upgrades arrive, the QS7 package is purely aesthetic. ABT CEO, Hans-Jürgen Abt, says the kit is designed to ‘underline that the Q7 is much lighter, more streamlines and sporty than its 10-year old predecessor’, which weighed a substantial 325kg more in top spec. 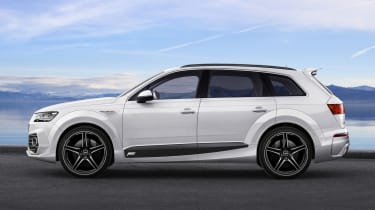 While the concept of a wing-wearing diesel SUV might still feel a little peculiar, as shown in ABT’s example, it needn’t look garish. Instead, we think the QS7 kit adds an acceptable level of aggression to the already imposing four-wheel drive. Anyway, with rivals like BMW offering M Sport trim on its Q7 competitor, the X5, aftermarket kits were always going to be on the cards.