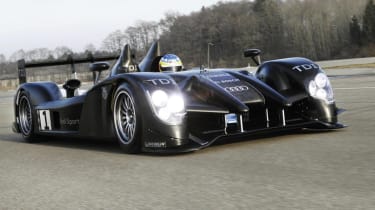 Audi has tweaked its R15 TDI racing car ready for the 2010 Le Mans 24 hours. Change was necessary as the sport’s new regulations aim to peg back the oil-burning entries that have ran away with the 24-hour trophy in recent years. They’ve enforced reduced air restrictor and supercharger pressures on diesel competitors (ran by Audi and Peugeot currently) to try and keep them in check with more traditional petrol-powered rivals. As a result of the tighter regulations, the R15’s aerodynamics have been fettled for extra efficiency. The front sees the biggest redesign, with a split nose that aids both drag coefficient and downforce. There have also been tweaks to the cooling system and fuel tank, while extensive work on the engine has seen the R15’s 5.5-litre V10’s output remain at ‘more than 440kW (590bhp)’. Feedback from the R15’s third-place finish last year has seen 20 key items changed, including the headlights, which are not set to illuminate the night stints with much greater aplomb. The R15 has a host of preparation ahead of its appearance at Le Mans in June. It is currently going through in-depth testing in the US and will compete in a number of races, including May’s 1000km race at Spa.