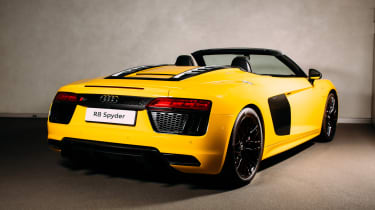 Order books have now opened for the Audi R8 Spyder, with prices starting from £129,990. First launched at the New York auto show in March, new R8 Spyder made its UK debut back in April alongside the TT RS, at an event in London concurrent with the Beijing auto show.

It is, on paper at least, a drastic improvement over its predecessor. It boasts a 0-60mph time of just 3.6 seconds, which is only a 0.1 second penalty over the standard coupe. On top of this, Audi claims rigidity is up fifty percent over the previous R8 Spyder, while combined fuel economy is up 10 percent - a quoted 24.1mpg.

The new R8 Spyder does bring with it a fairly significant weight penalty, tipping the scales at 1612kg which is a whole 158kg heavier than the coupe.

That weight penalty can be explained largely by extra bracing, with reinforcements made to the sills, A-pillars and windscreen frame and like the Lamborghini Huracan, the Audi R8 Spyder uses a hybrid carbonfibre and aluminium spaceframe chassis. The upshot is torsional rigidity 50 per cent better than before, yet the new car still weighs 113kg less than its predecessor. 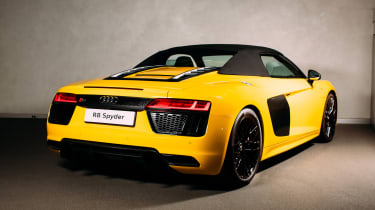 It's worth noting that the car announced in New York and shown in London is not the full Audi R8 V10 Plus version of the Spyder, that is undoubtedly destined to come later. Here you have the 'standard' 532bhp 5.2-litre V10 and 398lb ft of torque to enjoy, all of which is sent to the wheels via a seven speed dual-clutch gearbox.

Much of the R8 Spyder's appeal will be in its top-down thrills, and to this end the folding fabric roof takes 20 seconds to retract. It can also be opened and closed at speeds up to 31mph. When stowed, it sits behind a tonneau cover fixed behind the cabin. 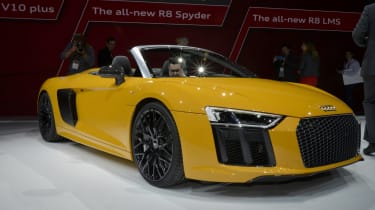 Inside the cabin, things are much the same as the coupe - itself home to one of the best interiors on the market. Audi's virtual cockpit display is standard, while a smartphone interface makes pairing your Apple or Android device as easy as possible. There's a Bang & Olufsen sound system too, with speakers in the headrests to benefit top-down aural qualities.

The car is available to order now. Pricing begins at £129,990 and first deliveries begin later in the year. Expect that price to rise by the time buyers have specified a few options however - owners will be able to personalise the interior and exterior to an extensive degree, with options such as gloss carbon components and LED and laser headlights.

A Sport Plus pack, including variable ratio dynamic steering, magnetic adaptive damping and a vocal sports exhaust, will also be available.