Audi has turned up the wick on its R8 V10 Plus to make its fastest ever road car: the new 569bhp Competition 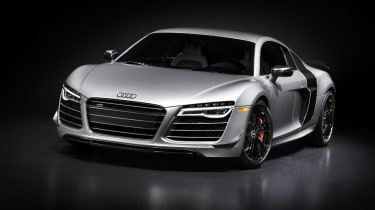 Audi will unveil its forthcoming limited edition R8 Competition to the public at the Los Angeles Auto Show on November 21-30.

Its 5.2-litre V10 has been tweaked to produce 569bhp, a good deal more than the R8 V10 Plus’ 542, and is linked to Audi’s familiar seven-speed S tronic transmission. The Competition is claimed to sprint to 0-60mph in 3.2 seconds, eventually powering on to a 199mph top speed, making it the fastest production Audi in history.

Other changes to mark the Competition apart include a sports exhaust system and ceramic brakes along with subtle styling cues such as gloss black exhaust tips, fixed rear spoiler, red brake calipers and a matte carbon finished front splitter and rear diffuser.

Only 60 examples will be put into production, exclusively for the US market, whilst deliveries are scheduled for the beginning of 2015.

‘The limited-edition Audi R8 Competition is the closest road car to our R8 LMS ultra race car that has won virtually every race around the world,’ explains the President of Audi America, Scott Keogh. ‘It is designed for the driving enthusiast and we’re excited to bring 60 units as a limited-edition to the US.’

The Competition represents the final send off for the first-gen R8, with a new model expected to arrive later in 2015. That car will face even stiffer competition than the current car, not least because it'll be going head to head with Mercedes' new AMG GT sports car and other rivals including Porsche's next-gen 911.