10 things you should know about the Mercedes AMG GT

After visiting AMG's Affalterbach headquarters we're convinced the AMG GT can take the fight to Porsche. Here's 10 reasons why 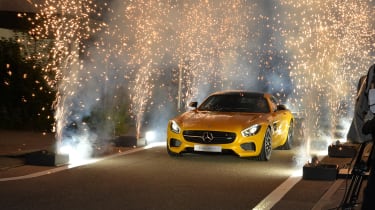 The pressure is well and truly on Mercedes to ensure the AMG GT is able to take the charge to a very capable list of rivals, a list that includes the ultra-involving Porsche 911 and brutish Jaguar F-Type Coupe R. And the fact the AMG GT follows in the tyre tracks of some very iconic Mercedes (just look at our gallery of them), well, that will only raise expectations.

Before we get to sample the new Merc brute in November to give you our verdict, we visited the home of AMG in Affalterbach. Rather than dampening our hopes for the new car, we’re more excited than ever. Here are 10 reasons why:

1. It's light weight: AMG has maintained that keeping weight down is a priority with the AMG GT. It's total weight - some 1570kg including a fuel tank 90 per cent full - hovers around the weight of the Porsche 911 Turbo. Combined with a 47:53 front-rear weight distribution, the AMG GT should be nicely balanced to go toe-to-toe with Porsche's finest.

2. The use of exotic metals: Part of that weight saving programme influenced the abundance of aluminium and magnesium found across the car. 90 per cent of the overall structure is made of the former, helping to keep the bodyshell down to a skinny 231kg weight. The structure is rather innovative too, with AMG searching for maximum rigidity and minimum weight from concept to construction. 'A benchmark setter' is how the Germans describe it.

3. That V8: We can't deny, we were slightly worried when we heard the AMG GT's 3.9-litre V8 engine was to recieve forced induction. Would AMG's latest product lose that brutal soundtrack? After witnessing the snarling, growling V8 up-close and personal in Affalterbach, our concerns were laid to rest. It sounds angry...

4. The tech: That aggressive sounding V8 is more than just an old fashioned brute however. It features turbo tech borrowed straight from F1 - where Merc isn't doing too badly - that places the turbos between the cylinder banks, earning the engine the nickname the 'hot-vee.' This allows for tighter packaging, faster throttle response and optimum gas flow. This all adds up to make the engine cleaner, more efficient and best of all, more powerful.

6. The luxury: It might come close to matching Porsche's most focused 911 for straight-line pace, but that hasn't come at a loss for comfort. The AMG GT features a curving dash that borrows its shape from the NACA duct, a feature developed for space that's found itself on goergeous racing cars including Lotus' stunning 72. Opting for the 'Black Diamond' package switches the interior's leather to black, the chromes to piano blacks and the trim to, you've guessed it, black. Mixing red leather with these black accents creates a pretty stunning cabin too.

7. There's no manual option: It's not all great news, because Merc's sports car will do without a third pedal. The only transmission available is the Speedshift DCT seven-speed dual clutch transaxle. This 'box promises to be effective however, with adjustements to shift harshness enabling smooth changes or rapid 'Race' changes. Power is sent through a limited-slip diff, which is mechanical in the GT and electronic in the GT S for faster responses.

8. It's a world first: Never before has a production sports car featured a dry-sump 'hot-vee' engine. This setup is normally reserved for the world of motor racing, where engines are exposed to high G-forces for prolonged periods of time. A dry-sump reduces the chances of engines from facing oil starvation, and Merc's choice to use this setup in the AMG GT suggests it should be very handy through the twisties indeed.

9. It'll be dynamic: Along with that dry-sump engine, the inclusion of a very serious geometry setup confirms AMG wants this car to challenge Porsche's best for handling and involvement. The GT S' Dynamic Plus pack adds adaptive engine and transmission mounts for improved throttle response, stiffer suspension, negative camber to the front axle and revised steering. AMG Ride Control (standard on the GT S and an option on the GT) allows the dampers to be adjusted through three stages of harshness too, so the optimum setup can be found for each driver.

10. There'll be a Black Series: This news has really got us excited. Just like its older, bigger brother, the SLS, the AMG GT will recieve AMG Black treatment to make it even angrier. We can expect the body to recieve an aggressive aero kit, the suspension to be stiffened up and power to grow from the GT S' 503bhp. We'll have to wait a while though, Mercedes won't produce the car until 2018.

So there you have it, 10 things we think everyone should know about Mercedes' AMG GT. Anything you didn't expect? Or anything you wish it had? Let us know in the comments below. We'll pass the message onto AMG during our next visit...