Could an Audi really be as thrilling to drive as a Ferrari or Lambo? You betcha 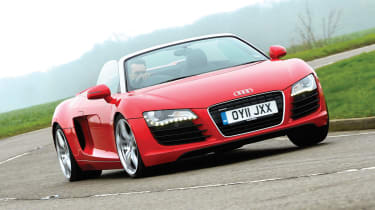 Audi has some fine performance cars in its illustrious history – and a performance legend in the shape of the rally-bred Quattro. But until recently it had never really dabbled in the supercar arena. That began to change when it launched the original, V8-engined R8 in 2006. The R8 took extraneous behaviour – all the little fidgets, squirms, structure-born shudders and sundry expressions of strain and imbalance – clean out of the driving experience. What was left was pure and direct. So stiff was the structure you were strapped into and so geometrically correct the actions of its chassis that the sense of oneness was almost overwhelming.

But it still wasn’t quite the real deal.  The breakthrough came when the engineers took the R8 and installed a glorious V10 engine. Not since the Honda NSX had there been a supercar that was quite so useable and easy to live with.

Visually there wasn’t much to get excited about, though the side-scoops were kicked out to grab more air and give more shape to the flanks, while the intakes front and rear had gappier spars and there were new crinkly 19in alloys. No, it was the 518bhp 5.2-litre V10 engine that moved the R8 up the credibility rankings, taking its performance into pukka supercar territory. Of course, it also added a more intriguing, exotic soundtrack, erupting into life with a lightly silenced, nasally whoop.

To go with the more muscular engine there was a sharper, more dialled-in chassis. And when Audi replaced the fixed top with a fabric roof – no folding hard-tops here – to produce the Spyder, the usual soft-top compromises (extra weight, a loss of rigidity and handling precision) largely failed to materialise, leaving just the usual open-air delights and clearer aural access to the thrilling exertions of a mighty engine.