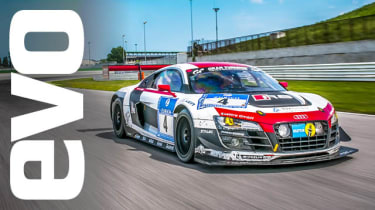 Meet 2014's Nürburgring 24 Hours race winning car, the 561bhp Audi R8 LMS ultra GT3 car. With 159 laps of the lumps, bumps, twists and turns of Germany's legendary 14-mile Nordschleife under its belt, you might think the V10 race car is a little worse for wear. But aside from the bug splattered bodywork and harshly worn Alcantara, the R8 is as sharp and rapid as ever. 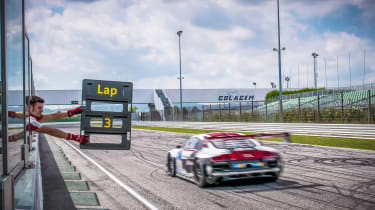 No surprise then to hear that evo's Richard Meaden leaped at the chance to drive it, having previously watched it lap him when he took part in the same endurance race in a less powerful car. Slipping into the bucket seat and fastened deep within the R8's shell, Richard has just a few laps of Italy's Misano race track to soak up what makes this modern legend so fast. 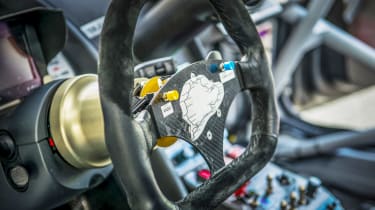 Having run a V10'd R8 road car on evo's Fast Fleet throughout 2014, Richard is well placed to offer judgement as to what makes the GT3 car so special, and despite the stripped-out interior, the car's familiar characteristics allow him to get into the groove in just a matter of corners. This is no half paced test, Richard is really pushing. 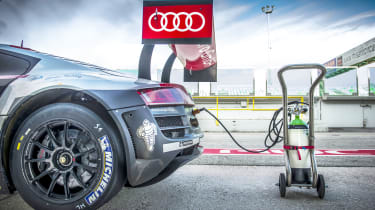 So watch the video above to enjoy the wail of that gorgeous sounding 5.2-litre 10-cylinder on sun baked Italian asphalt. It might look battered and bruised, but as the footage above shows, there's enough left in the high-miler Audi to impress even a hardened racer like Richard himself.