Official pictures and details of the roadster Audi R8 supercar, with V10 power 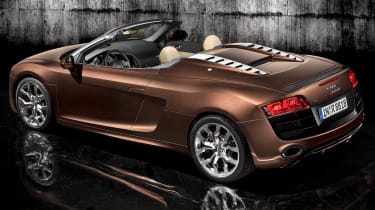 After pictures of the new Audi R8 Spyder were leaked onto the internet last week, more details of the production-ready drop-top from Ingolstadt are now available, and brown paint aside, it’s looking good.

As we predicted when the pictures first made their way onto the web, the Spyder will get the 10-cylinder, 5.2-litre engine from the range-topping R8 V10 coupe, putting out 518bhp at 8000rpm and 391lb ft of torque from 6500rpm.

All of this means the R8 Spyder will do the 0-60mph dash in 4.1sec and won’t run out of puff until it’s knocking on the double-ton door at 194mph – a tad slower than the coupe, but not much. It’ll remain mid-engined and four-wheel drive.

Thankfully, Audi has decided on a canvas roof over a hard-top setup as it keeps the weight down – it’ll open and close in 19 seconds at speeds of up to 31mph. Although with the extra additions to keep the car from wobbling itself apart over bumps, the new model still tips the scales at a chunky 1720kg.

After the sheets are pulled off the Spyder at the Frankfurt motor show, it’s expected in showrooms in the first quarter of 2010, and will command a hefty premium over the coupe, with a base price of 156,400 euros – about £137,700 in today’s money.