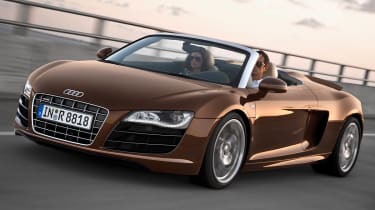 The Audi R8 Spyder is just about to launch, and the German manufacturer’s picked a fairly dramatic place to do it.

West London Audi is the world’s biggest Audi showroom, and gets its grand opening tonight alongside an official unveiling of the Spyder, which has also been priced ready for sale.

If you want a drop-top R8, set aside £109,580 for a six-speed manual or £114,670 for a six-speed R-tronic automated manual. It sounds a lot, but those transmissions do come mated to the 5.2-litre engine from the R8 V10 supercar, with a fairly potent 518bhp and 391lb ft of torque on tap. Peak horsepower is delivered at a heady 8000rpm, too, providing a fine excuse for unleashing all of the ten-cylinder’s soundtrack sans roof.

The V10 propels the Spyder to 62mph in 4.1sec (and to 124mph 12.7sec), two tenths of a second slower than its hard-top sibling. The top speed is down slightly at 194mph. Not bad deficits, considering the extra roof mechanism that’s been shoehorned into the supercar’s body.

Things are no doubt helped by a kerb weight that’s kept down by use of carbonfibre composite panels on what’s a bespoke body, while the roof is of the soft rather than hard variety.

Quattro permanent four-wheel drive is standard, but with a heavy rearward bias, while Audi’s trick magnetic ride, all-LED headlights and a fancy Bang & Olufsen stereo are all included in the price, too. It's Audi's most expensive car yet, but only commands a £10K premium over the V10 coupe.

If it takes your fancy (and you live in London, obviously) then West London Audi’s probably a great place to plonk down your deposit. It’s been six years and £45million in the making, and boasts seven storeys, three of which will display up to 116 cars within eyeshot of the M4.