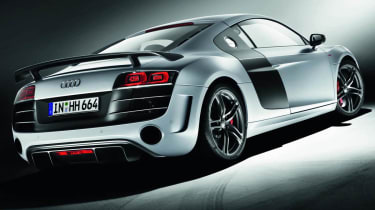 These are the latest photos of the R8 GT, a pared-down version of Audi’s clinically adept supercar. Just 33 examples are to be produced, and the £142,585 car is destined to be the fastest Audi ever, boasting a 199mph top speed.

Audi claims to have used expertise gained from its R8 LMS GT3 racecar in developing the GT, and weight loss comes from all areas. The switch to bucket seats saves 31.5kg alone, plus 4kg of unsprung mass from the (standard ceramic) brake discs.

The GT is only available with Audi’s R tronic gearbox, which normally sends 85 per cent of power to the rear wheels and helps the car along to 62mph in 3.6sec. The order books are now open, with Audi expecting the first deliveries to take place by spring next year.